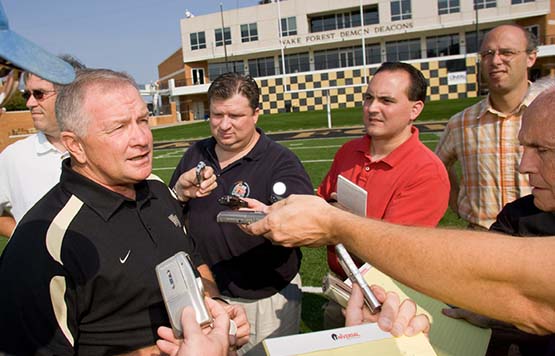 For any plan to succeed, everyone has to be on the same page. And under Jim Grobe, there are no page-turners. When Grobe was hired in December of 2000, less sophisticated observers who consider only won-lost records in evaluating coaches were underwhelmed. In the six years he had spent as head coach at Ohio University immediately prior, his record was precisely .500—33 wins, 33 losses, and one tie. But Ohio historically had been among the worst programs in the nation. As modest as Grobe’s victory total was, it made him the fourth-winningest coach in school history. In the decade before his arrival, the school’s overall record had been 17-89-2, including one winless season and five years with one victory. With that to build on—and by winning Mid-American Conference records in five consecutive seasons and a MAC title—he probably did as good a job as any coach in America.
Ron Wellman, Wake Forest’s director of athletics, was one who perceived the magnitude of Grobe’s achievement at Ohio and why it might make him the ideal guy for Wake Forest. In evaluating Grobe’s potential, “I went back to [his time at] Air Force,” he says. (Grobe was an assistant at the Air Force Academy under the legendary Fisher DeBerry from 1984 to 1994.)
“Air Force was excellent scholastically as well as athletically, which was our model. As a head coach, he had guided the worst program in Division I football to a conference championship. He was willing to be patient. And he was a disciplined person who would stick to his plan.”

Grobe’s definition of sustained success is simple: challenge for the conference title and a bowl invite every year, and graduate an overwhelming majority of players. Consider the latter already accomplished: in the most recent rankings, Wake Forest was first in the nation with a football Graduation Success Rate of 96 percent—38 percentage points above the national average. Deacon fans can take justifiable pride in that accomplishment, and can credit the good work of the academic support staff and a recruiting strategy that emphasizes academic ability and interest as much as athletic talent.

As for the former, if one were to distill to four factors Grobe’s blueprint for competing for titles and bowl bids, they would be: coaching-staff stability; recruiting for character and scholastic aptitude as well as talent; wholesale redshirting; and continual upgrading of facilities.