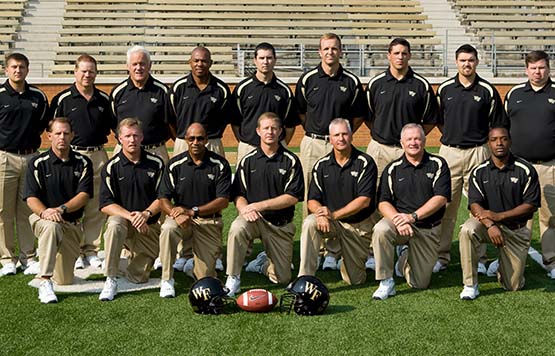 Six of Grobe’s nine full-time assistant coaches also served on his staff at Ohio, and two of them—offensive coordinator/offensive line coach Steed Lobotzke and running backs/kickers coach Billy Mitchell—were with him at Air Force as well. Linebackers coach Brad Lambert, hired in 2001 to replace Grobe’s only Ohio assistant that did not follow him to Wake Forest, is still on the staff, and tight ends/fullbacks coach Tom Elrod (’97, MBA ’01) played for Wake Forest and was a graduate assistant for three seasons before being named a full-time assistant in 2003.
“Jim has a great coaching staff, but just as important, he has a loyal one,” says Bill Faircloth (’64), a Wake Forest football institution who captained a Deacon team that lost nineteen straight games, who coached four seasons under John Mackovic, including the Tangerine Bowl season of 1979, and who has served as the assistant athletics director for football for a quarter of a century. “The guys really enjoy working with him,” Faircloth says. “He has a lot of confidence in them and lets them coach, and in return they are tremendously loyal.”

“I just don’t know that you can overemphasize experience and having a staff that’s been together a long time,” Grobe says. “I think you get better play from your players if they have developed a sense of trust with your coaches. We’re at the point where the kids are hearing a lot of the same coaching points and terms over and over and over again. We might tweak a little bit from time to time, but I might not say two things to any of my coaches during the course of a season that is of major consequence.

“What our coaches have done the very best job at here is adapting our system to our personnel. Each year we go through spring practice and then come back in August and add Xs and Os to try to emphasize the strengths of our players rather than just take a certain system of offense and defense and say, ‘Okay, by God, you’re going to fit into this system, no matter what.’ I thought we’d have to run more option than we did to be successful here, but we just didn’t have option-type personnel. John Stone, who was here when we first arrived, was not very big and didn’t have great hands, but he was the ACC hundred-meter champion. We knew we couldn’t make a living out of throwing him the ball downfield, so we ran all that sweep stuff and let him outrun everybody. He’s a good example of the exceptional job this staff does of adapting our system to our talent.

“In any program, the head coach generally gets too much of the credit and too much of the blame,” Grobe adds. “I truly believe that’s what sets the very best programs apart from the rest—good staffs; good assistant coaches.”