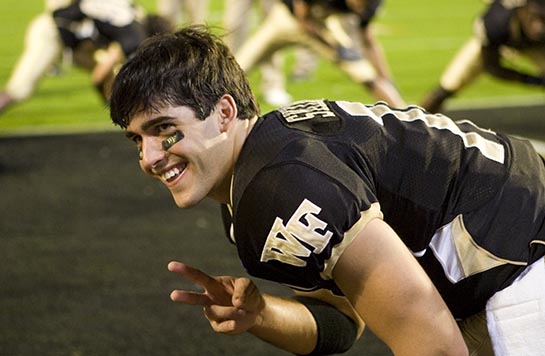 Sophomore quarterback Riley Skinner epitomizes the kind of unheralded but productive player Grobe and his staff have recruited to Wake Forest.

Wake Forest’s recruiting classes gets no respect from the so-called experts on college football recruiting. Rivals.com, a leading Internet recruiting service, rates Wake Forest’s incoming class no better than ninetieth in the nation. None of the classes Grobe has recruited, in fact, have been rated any higher than fiftieth in the country. But as the late Mayor Richard Daley of Chicago once remarked famously, “Experts. . .what do they know?”

“The number one thing with Coach DeBerry was that he had something of a kinder, gentler approach to the way we treated players,” says Grobe of his role model and primary mentor. “Rather than getting in their shorts and doing a lot of yelling and screaming, Coach D was the kind of guy who would put his arm around them and pat them on the back. It was more classroom-oriented—teaching the kids fundamental techniques and then letting them go play.

“But here’s the problem: if you don’t have the right kids, that approach won’t work,” he continues. “That only works with kids who don’t need to be kicked in the seat of the pants to do the right things—kids who you can assume from the outset have heart, have character, who want to be the best, and will work to excel if they’re taught the right fundamentals and treated the right way. So we focus on character.

“Our basic rule in recruiting,” he says, “is that when we go into a high school, if we hear anything negative about a kid—anything at all, even something as small as he’s a little lazy—from the principal, the coaches, the counselors, the teachers, anyone in the building—we’re out; we stop recruiting him.

Grobe’s recruiting strategy focuses on finding self-starters. “You get the right kids, teach them the way it’s supposed to be done, and then get out of the way and let them go play.”

“We’d much rather have a kid who’s an inch shorter, ten pounds lighter, or a half-step slower if he’s got a great motor, has a great attitude, loves the game, and is going to do all of the things he needs to do. What we have found is that if you bring in a great kid who’s a good player as a freshman, he’ll be a great player in his fifth year because he’s worked hard to get to that level. If you have too many renegades in your program, you’re going to spend more time yelling and screaming and less time teaching and coaching. Our philosophy is, great kid-good player, not, okay kid-great player.”

At a school as selective as Wake Forest, scholastics are key to his recruiting strategy. “It doesn’t do us any good to have an all-solar system player who’s a 400-SAT student,” he notes. “It [Wake Forest’s academic standards] shrinks our recruiting pool quite a bit. Our boosters don’t like it when I tell them that our recruiting pool is more like a puddle. We don’t have to find [straight-A] students, but we do have to find college-bound kids who want a degree from a school like Wake Forest. Basically you’re looking for guys who want to win a championship in a BCS conference and get an Ivy League-type diploma. It’s not easy, but they’re out there. It’s our challenge to find them.”