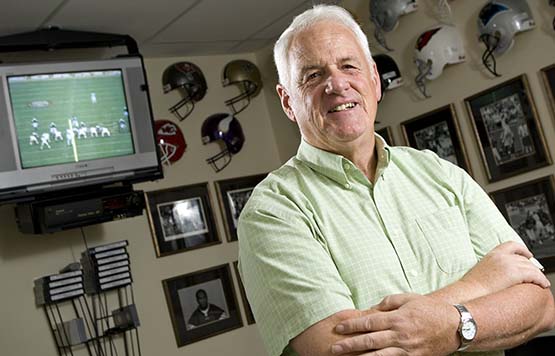 Assistant athletics director for football Bill Faircloth (’64) admires the loyalty Grobe has instilled in his staff.

In his first five seasons at Wake Forest, Jim Grobe redshirted 114 of his 123 recruits. Most coaches pay lip service to redshirting in theory—that an extra year allows a guy to develop strength, maturity, and knowledge of the system. But when it’s all on the line, many coaches—especially those who feel they must win now—won’t hesitate to play a true freshman.

Redshirting is holding players out of competition their freshman year to defer their four years of eligibility.

Not Grobe. He never rushed a true freshman onto the field that he didn’t think was ready, physically or mentally, to compete at the highest level. His patience and discipline came to fruition last year, when he fielded a squad rich with fifth-year seniors, fourth-year-juniors, and third-year sophomores as starters and quality backups.

“We’re not afraid to play true freshmen; we’re afraid to waste true freshmen,” says Grobe, who acknowledges losing some recruits because of the policy. “What we don’t want to do is let a [freshman] cover six or seven kickoffs or be on the field goal and extra point team all year and waste a whole year of eligibility.

“What I tell the kids is, we want your four best years of football. If that means you’re good enough to play right away, you’ll play. I tell the position coaches that our benchmark is thirty snaps a game on offense or defense—not on special teams, but regular offensive and defensive sets. If they can’t promise me that, he’ll sit.”

Grobe’s absolute job security affords him the patience required of a successful redshirting strategy. “That allowed us to put the brakes on and slow down. I think we’ll continue having ten to fifteen fifth-year seniors every year, with good groups of fourth-year juniors and third-year sophomores. Those forty-five or so kids are going to comprise the lion’s share of our football team each season.”

One other factor bears mentioning. High-profile recruits—those with the eye-popping forty-yard-dash times and other spectacular measurables—are more prone to enter the NFL Draft early than the caliber of athlete Grobe is signing. Knowing they’ll lose them prematurely might discourage their coaches from redshirting them. Also, the top athletes want to play right away and are more likely to choose programs that play their true freshmen. Junior linebacker Jon Abbate’s early draft declaration notwithstanding, “I don’t think it’s going to be a problem,” Grobe notes, “because most of our kids are committed to leaving here with a degree.”