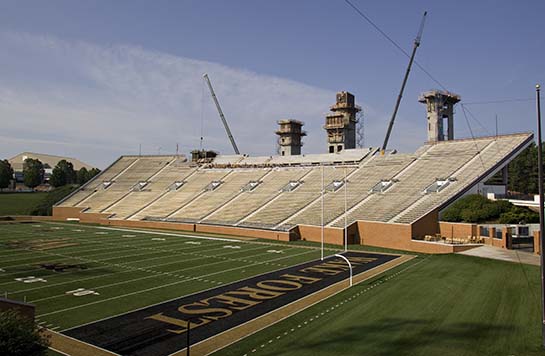 The Deacon Tower project is the latest and most ambitious in a perennial string of facility upgrades during the Grobe era.

Grobe minces no words in describing Wake Forest’s football facilities when he arrived.

“They were terrible; absolutely terrible,” he says. “Ron Wellman was committed to getting our facilities up and running, but the only problem was, it was a big project, and we couldn’t accomplish it overnight.

At Air Force, we always had one little project going on, and that’s the approach we took. Ultimately we’re going to have to get to the stadium locker room and redo our weight room. But once the stadium is finished, I think we’ll be able to say that our facilities are as good as everyone else’s. But of course, we don’t ever want to say that we’ve arrived so we’re going to have to identify ways to improve them a little bit each year.”

“We’ll have three or four more phases of stadium renovation after the initial phase,” he says. (The two-year Deacon Tower project now under way includes a new broadcast and print media operations facility, premium club seating and box suites, and new ground-level restrooms and concession stands.) “All are focused primarily on providing more amenities for our fans, with expanded parking and tailgating areas, restrooms and concessions around the stadium and at Deacon Hill, and so forth. When we’re finished, we will have one of the most comfortable and enjoyable college football stadiums in the nation.

“Of course, all this depends on our ability to raise the money for it,” he notes. “But I truly believe our football team will be better in 2007 than it was in 2006, and better in 2008 than it will be in 2007. If that happens as I expect that it will, then our fans will respond in attendance and fundraising.”