A War of Words 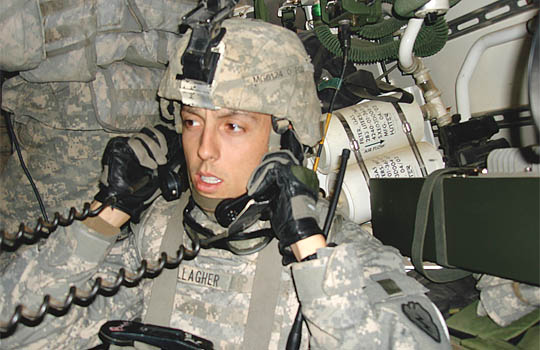 Lt. Gallagher during service in Iraq.

“You once gave your platoon an order to kill. What was it like to make, literally, a life or death decision in a matter of seconds?” 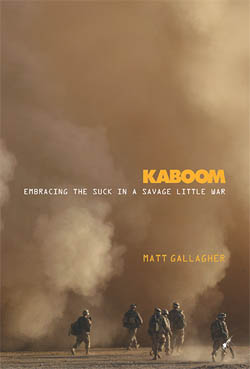 “Kaboom: Embracing the Suck in a Savage Little War” by Matt Gallagher

When Matt Gallagher (’05), a history major and English minor from Reno, Nev., first signed up for Wake Forest’s ROTC program, he wanted to become a JAG lawyer to follow in the footsteps of his attorney parents. But two weeks into his freshman year, 9/11 happened. The terrorist attack, along with the University’s Pro Humanitate motto, made him change his mind. “I started thinking above and beyond myself. I wanted to give back to my country,” says Gallagher. “So I joined the front lines of the armored cavalry.”

While serving as the leader of his Army platoon, Gallagher started a blog. Though it began as merely a way to keep his family and friends informed during his deployment (December 2007 to March 2009), his online journal quickly became popular and controversial, sparking an international uproar — and a book deal.

Did you realize your blog was gathering a large following?
I installed a hit counter so I could tell that a growing number of people were clicking on my site daily. The blog has gotten nearly 200,000 page views to date. I’ll never forget the day I got a comment from someone who wasn’t my mother — that was cool.

What was the event that prompted your now-infamous blog post?
My battalion commander wanted to promote me to executive officer. It would have been an “off the line” job, meaning I’d be away from my platoon and in charge of gear. I had no interest. I told him: “I’ll do the best I can, but you should know that I’m not planning on staying in the Army forever, so maybe this job would be better suited for someone who is staying in and could use this opportunity to move up the ranks.” Then he chewed me out for not wanting to make the Army my lifelong career.

Why didn’t you want to stay in the Army?
Once you move up the pipeline, you get farther away from the reality of what’s happening on the ground. I didn’t want my life to become “Office Space” in camo.

What did you do after your battalion commander yelled at you?
I went back to my room and did the same thing I’d been doing for six months: I wrote a blog post. Except this time, I mocked him and his careerist mentality, using fake names like always. I was supposed to run all my posts by another officer first, but this time I didn’t. It was probably a mistake. I was naïve in thinking it wouldn’t get back to him.

So your battalion commander found out about the blog post?
Yes. Supposedly he was reading a Salon.com article in which a writer had linked to my post. As a result, he told me to shut down my blog.

But, technically, did your blog post break any military rules?
No. I may have insulted my boss, but I didn’t violate “operational security,” the military’s blogging rules — I didn’t describe who or where we were.

Do you think your battalion commander made the wrong call by shutting down your blog?
Yes. It was a decision made by a reactionary bureaucracy that isn’t in tune with 21st century media.

If you were in your battalion commander’s shoes, how would you have handled it?
I would have blogged back at the soldier. Or I’d have made him write an apology. You can’t kill the Internet — once it’s out there, it’s out there.

Did you challenge your battalion commander’s decision?
No. The controversy had become such a distraction compared to the seriousness of my daily life that I didn’t want to aggravate or prolong the problem.

Explain the irony of what happened next.
By shutting down my blog, my battalion commander ended up drawing even more attention to it. The blogosphere went nuts — people were posting on their own sites about whether or not it was ethical for the military to make me stop writing.

Then journalists found out about the controversy?
One month later, a reporter embedded in Baghdad wrote an article about it in The Washington Post. He was tipped off by a few of his officer friends who were fans of my blog. Then, even the Pentagon got wind of it.

Was The Washington Post the only place that story ran?
No. Then Stars & Stripes, the U.S. military newspaper that goes out to all the Armed Forces — re-published the article on its cover. Some soldiers would approach me, asking if I’d autograph their newspapers.

Now that you’re no longer with the military, does the blog still exist?
Yes. Somebody created a mirror site off a Google cache. I got operational control of it once I left the Army. You can still read it at kaboomwarjournalarchive.blogspot.com.

This summer, General Stanley McChrystal was fired by President Obama for airing grievances publicly to Rolling Stone magazine. He was, like you, penalized for speaking his mind and disrespecting authority, albeit on a much grander scale.
I wasn’t surprised by what he said, but I was surprised that he said it to a journalist on the record.

There are some harsh scenes in the book. One detainee is so terrified that he soils himself. A platoon member is accidentally set on fire. An injured Iraqi storms onto your base while his intestines spill out of him. But those moments are tempered by tender and even funny experiences. Like the parts where Iraqi children swarm around you, begging for candy or Beanie Babies. Or when after a stressful mission, you rock out to a Spice Girls song in your armored vehicle.
Throughout the book, I wanted to show both sides of life as a soldier. War can be brutal, but also hilarious.

You once gave your platoon an order to kill. What was it like to make, literally, a life or death decision in a matter of seconds?
My instincts kicked in. Only later did I have time to second- and third-guess myself.

At one point in the memoir, you help a platoon member pick up a bomb. You’re pretty sure it won’t detonate, but not 100 percent sure. Where does that courage come from?
I was the lieutenant, and I told myself that I would never ask one of my soldiers to do anything that I wouldn’t do myself. You just have to turn off that fear and do it.

You yawn a lot throughout the book, diagnose yourself with insomnia, and sip coffee, chai tea and energy drinks called Rip-Its. You also have to walk around in full uniform on summer days when temperatures regularly soar past 100 degrees.
War is incredibly draining. You need those stimulants to perk yourself up and stay alert, because most of the time you are physically and mentally spent — not to mention filthy.

In one scene, you notice graffiti in a porta-john: America isn’t at war. Soldiers are at war. America is at the mall. Does U.S. apathy and ignorance bother you?
Yes. It’s an unintended consequence of having a voluntary force. People who lack a direct connection to the war are often unengaged. To a certain extent, I understand. People have lives. The economy is tanking. Pelicans are dying in oil. The last thing they want is more bad news. But every now and then, I get on my self-righteous soapbox.

You describe moments of subtle defiance in the book. Under your uniform, for example, you wear socks featuring the Guinness beer logo and pink boxer shorts with skulls on them.
It was a way of reminding myself that I was an individual. I could get the job done and do it well, but still be Matt. The military has a group culture — everyone wears the same uniform, cuts their hair the same way, eats the same food, speaks the same coded language — so it’s easy to forget who you are sometimes.

You spout acronyms. Some are serious, like AO (area of operations), and some are humorous, like BCGs (birth control goggles — eyewear so ugly it deters the opposite sex). Was it hard to learn the lingo?
It took me a year to master it all. I carried a notebook and repeated phrases out loud.

What did you miss most while you were in Iraq?
Guinness. And shade — there are hardly any trees over there.

How has war changed you?
In some ways, it ages you. I’ve experienced a lot for a twenty-something. But when you’re in the military, so much is structured and done for you. So in other ways, I feel younger than my peers. I haven’t bought clothes in four years. I’ve never had to pay rent or bills. It’s like I’ve gone back in time.

Do you miss being in the Army?
I miss the thrill, the camaraderie, and the sense of purpose. But there’s a lot I don’t miss. Today, I definitely enjoy growing my hair out and sleeping in.

Have you always wanted to write?
Yes. One summer between years at WFU, I tried to write the “Great American Novel.” It was terrible. I submitted it to lots of literary agents, but only one, William Clark, was kind enough to send me a note back. He rejected it, but still, it was nice. I’ve since burned every page of the novel, but it was good for my development as a writer.

How did your book deal for Kaboom come about?
A month after The Washington Post article came out, many literary agents e-mailed me about turning my blog into a memoir. One of them, coincidentally, was William Clark. He didn’t remember me, but I never forgot his name. So I signed with him, and 10 months later, Da Capo agreed to publish it. After I returned from Iraq, I wrote the first draft in four months, while memories were fresh. The book hit store shelves in April of this year.

What’s next for you?
I’m in graduate school this fall at Columbia University in New York City. I’m getting a master’s degree in Islamic studies. Whether that degree will lead me to a government job or a think tank or academia, I don’t know yet.

Do you plan to write more in the future?
Yes, I’m taking another crack at that novel. This time, I’m writing about veterans and the madness of New York City. Hopefully it’ll be better than my first.

Gallagher will be signing “Kaboom” at the University Bookstore in Taylor Hall on Thursday, Oct. 7 from 3-5 p.m.
Find out more »

Gallagher will be speaking in DeTamble Auditorium of Tribble Hall on Thursday, Oct. 7 from 5-6 p.m.
Find out more »