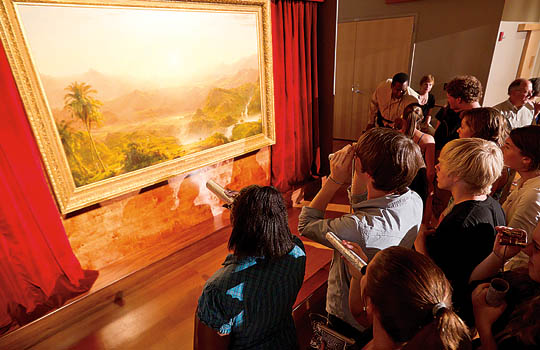 First-year students discuss ‘The Andes of Ecuador’ during orientation.

Related: I Looked and Learned

The sound of Andean music with its panpipes and notched flutes drifted from tents on the front lawn. Colored banners swayed in a hot summer breeze. And inside Reynolda House Museum of American Art, Frederic Church’s “The Andes of Ecuador” awaited 1,225 first-year students.

In the past, Wake Forest assigned its new students books, movies or essays for its summer “reading” project. This was a first: a painting as the assignment. During the summer, new students were asked to watch a number of videos and read short passages about the painting. The summer academic project concluded with the visit to the museum with their faculty and upperclass student advisers. Reynolda House, an affiliate of Wake Forest, partnered with the University on the project.

“In a way the summer academic project is a warm-up or trial run for what happens in the more intense environment of the Wake Forest classroom,” said Perry Patterson, associate dean for academic advising. “We are focused on looking at the work of art through many different academic perspectives.”

For many years new students at Wake Forest have participated in a collective academic experience during orientation by reading a book, viewing an important film or attending a lecture, then discussing their responses with their academic advising groups. But this year brought something different.

To begin the story of the 2010 academic project, “Encounters@Wake,” we have to go back a couple of centuries, to 1853, when the young American landscape painter Frederic Edwin Church set off for South America. Profoundly influenced by the journeys of Alexander von Humboldt and Charles Darwin, Church trekked through the jungles and mountains of Colombia and Ecuador for more than six months, making sketches as his scientific predecessors would have collected specimens. Upon his return, the artist undertook his largest and most ambitious canvas: “The Andes of Ecuador” (1855).

Frederic Church designed his works to have both scientific and religious connotations. In “The Andes of Ecuador,” all the precise botanical and geological details are bathed in celestial light. The painting’s success encouraged Church to adopt a new theatrical exhibition strategy: displaying his major canvases alone, swathed in velvet curtains, and charging an admission fee. Visitors brought opera glasses to immerse themselves in Church’s detailed landscapes — the 19th-century equivalent of watching a 3-D movie. Church’s paintings traveled around the country and even across the Atlantic. Tens of thousands of people went to see them.

“The Andes of Ecuador” now hangs at Reynolda House Museum of American Art, a University-affiliated museum with a worldclass art collection displayed in the historic 1917 home of R.J. and Katharine Reynolds.

To prepare Wake Forest students for the viewing of Church’s painting, the University dedicated a section of the new-student website to the academic project. Throughout the summer, students had access to highresolution images of the painting, excerpts from books written by the most influential scientific and literary figures of the 19th century, and videos created by professors from across the University highlighting the interdisciplinary nature of the painting. Videos spanned a range of topics, from Andean ecology and the perception of color to visual literacy and the economics of art. President Nathan Hatch headlined this impressive group of scholars by discussing the connection between the painting and his own area of research — 19th-century theology — and by emphasizing the importance of interdisciplinary inquiry to a Wake Forest education.

This was a pioneering project. To our knowledge, the use of a painting for orientation has been done only once before. Last fall, the University of Pennsylvania introduced its first-year students to another famed 19th-century painting, Thomas Eakins’ “The Gross Clinic” (1875), from the Philadelphia Museum of Art. This collaboration between University and museum provided a model for Wake Forest and Reynolda House.

Why ask students to look at a work of art? Because developing the ability to become critical viewers and thinkers is an essential part of a liberal arts education. The most basic skills needed to look at and interpret a 19th-century painting are, in fact, very similar to those needed to visually analyze the images we encounter every day, whether on computers, television screens or billboards.

The cultural and historical contexts might be different, but the questions are often the same. Encounters@Wake enabled students to see how a single work of art can engage issues of science and exploration, religion and spectacle, politics and perception. By looking carefully and closely, details can become the source of revelation.