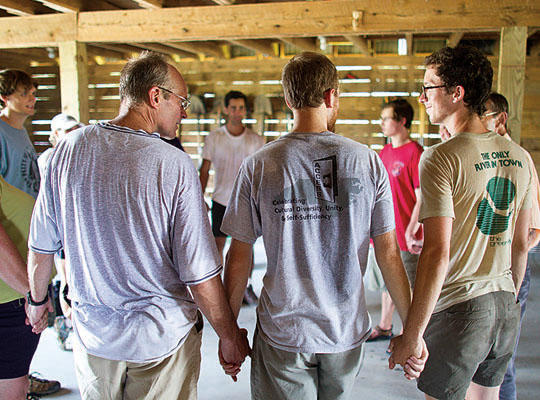 Everyone is welcome at Peacehaven Community Farm.

Buck Cochran (’82) finds his calling in a community where sustainability is about more than farming.

Whitsett, N.C. — All the chickens have gone missing, which means no more eggs and the suspect a fox on the lam. On this day, a volunteer has defied the July heat wave and sunk the tires of his pickup in what is likely the only muddy spot between this sun-baked 89-acre farm and the Burlington city limits four miles away. He’s stuck. 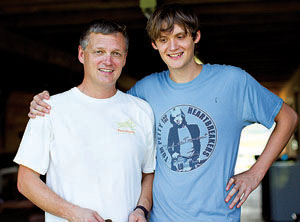 Cochran with son Trey, a college sophomore, who says his dad is ‘helping people the way he’s helped me.’

No sweat, even in this heat. Buck Cochran, Wake Forest chemistry major (’82), former naval flight officer and mission commander, former FMC Corp. chemical salesman, Duke Divinity School graduate, ordained Presbyterian minister and now accidental farmer of the sustainable variety, is on the cell phone ready to assist, calmly requesting details. He’ll motor to the rescue as soon as he helps the remaining volunteers set up for the shared lunch inside an old barn. Outside, a Moravian star hangs from the roof, a dove-white origami beacon to passersby on N.C. Highway 61.

Everyone is welcome at Peacehaven Community Farm, a vision birthed by Susan Elliott, who worried — even before she became ill — what would happen to her son with cerebral palsy after she was gone. She died from breast cancer in September 2009 but not before she had fallen in love with this land on the shores of Lake Mackintosh, persuaded her husband, Tim, to buy it to pursue her dream of building a housing community for special needs adults and lit up at the possibilities when Cochran announced his resignation to his congregation one Sunday. “That’s when Susan looked at me and said, ‘He would be perfect. He could run this for us,’” Tim Elliott says.

His wife envisioned not only a nonprofit that would provide housing but also a working farm to give residents and volunteers meaningful labor — and relationships. Never mind that Cochran lacked agricultural know-how.

Cochran, 50, is a quiet man more interested in listening than talking. He’s attentive, not overtly distracted by technology, as organized with computer files as he is with the farm tools. He is thoroughly present. In his t-shirt, jeans and work boots, he lopes across the land like the farmer he is becoming.

“I don’t know much about farming, but I know how to hire good people,” he says, amused at where he sits on the agricultural learning curve. Two young graduates of N.C. State University, both specialists in horticulture with a devotion to sustainable farming methods, are his teachers and his first employees.

In 2007 Cochran felt called to leave the 2,000-member Westminster Presbyterian Church in Greensboro, where he had been associate pastor ministering to youth and their families for six years. He felt a divine nudge to do something else. What, he did not know.

Such a calling was not unfamiliar. It had happened after his son, Trey, was born with Asperger syndrome, a form of autism spectrum disorder. He quit the corporate world and moved his wife, Cathy, a nurse who is director of pediatrics at Moses Cone Health System, Trey and daughter Cameron to Durham so he could attend seminary. “Trey started me on this journey,” he says.

The Elliotts hoped Cochran might join their pursuit to create a community where adults with intellectual and physical disabilities could live, Elliott says, “in a place that feels like home.’’

When he first approached Cochran with the idea, Elliott says, “You could just see the creative juices start to flow.”

Across the country families with children with developmental disabilities have few options for services after their children reach 21. “There’s such a need for this,” Cochran says. “Parents shouldn’t have to pray that their children die before they do.”

Cochran signed on, which meant building a nonprofit from scratch, assembling a board, researching federal and state laws, hiring staff, talking with parents, working with funders. “You’re inventing as you go,” says Peacehaven board chair Gail Haworth, who founded The Servant Center in 1995 to provide transitional and permanent housing for Greensboro’s disabled and low-income people. Cochran has a dreamer’s passion for the project combined with the skills of a planner who has to enact a business strategy, she says. “He also brings a spiritual part to it — the ‘You’re a part of something grand!’”

The plan calls for placing individual houses for six to eight residents and assistants — about 30 people in all — in a sun-drenched grassy cove surrounded by loblolly and shortleaf pines. The building phase is at least a year away, maybe two. The uncertainty seems not to have rattled Peacehaven’s leaders, who are guided by faith that resources and answers, such as guidelines for selecting residents, will become clear when the time is right.

“I have no doubts about this succeeding,” says Haworth. “Peacehaven is a very peaceful place, and part of it is that Buck is putting it together.”

The idea to make the site a sustainable farm in which poultry and livestock are moved systematically to new grassy areas, fertilizing as they go, and crops are grown without pesticides quickly captured the interest of neighbors and congregants. The farm’s momentum in part has been sparked by the booming national interest in “slow food” and healthy produce locally grown and sold. Eventually Peacehaven might send goods to market, perhaps even start a wool fiber cottage industry. The crucial ingredient now and for the future is collaboration– volunteers, some of whom might someday seek extended stays on the property, working alongside residents who contribute according to their ability to the farm’s operation.

Peacehaven’s closest model is L’Arche, a French word that means “the ark,” a global network of 137 ecumenical and interfaith communities where people with and without intellectual disabilities share their lives in homes, workshops and day programs. Eighty-two-year-old founder Jean Vanier began the movement in 1964 when he invited two men who had been confined to an institution after the death of their parents to come live with him. The Globe and Mail named Vanier Nation Builder of 2008 for inspiring Canadians through his social visionary work, and prompted Michael Higgins in Commonweal Magazine to label Vanier a man “who has spent his life calling into question society’s penchant for ranking, honors and success … He is the consummate subversive of the value system that equates human dignity with utility.”

Cochran learned about L’Arche when his son was young, and he later visited a L’Arche community in Washington, D.C. He wants Peacehaven, like L’Arche, to foster relationships and provide a loving, supportive environment. “We want to be a place where (residents’) lives are valued, and we couldn’t do this without them,” he says. “A big ethic of L’Arche is how folks with disabilities can be our teachers.”

On the first Saturday in March, 70 people showed up at Peacehaven to volunteer. “That was the day we broke ground, the day I looked out and saw the people on the hill and wept,” Cochran says.

Now, volunteers come on Thursday evenings and Saturday mornings to tend the vegetable gardens teeming with pole beans, banana peppers, tomatoes, cucumbers, onions and okra. Some bring family members who have disabilities and want a chance to work. The farm has goats, sheep, Black Angus cattle, pigs, geese, three dogs and a cat. The murdered laying hens will be replaced, the new chickens enclosed in an upgraded, electrified portable coop designed to vex the fugitive fox. Already, with the regular volunteers showing up and sharing a potluck at the end of every session, community is taking shape.

As he guides a visitor around the farm, without prompting, Cochran reflects on his own teachers and education at Wake Forest. When he was a boy growing up in Troy, N.C., he admired Earle Connelly (’48), his father’s best friend and a city leader. “I wanted to be like him, to be that kind of man,” he says. “I developed—this is going to sound hokey—joy for learning that has allowed me to do these different things. I’ve been in radically different vocations. My time at Wake shaped me and formed me. I remember sitting in freshman comp and reading Flannery O’Connor with (the late) Dr. (John A.) Carter. The way Dr. Carter laughed over an O’Connor passage made Cochran think, “There’s something deep inside of him that I want.” He found it: lifelong learning and “an opportunity to be shaped by the motto of the school so that your education is something you can put to use serving others.”

About three miles down the road from Peacehaven is the Brick Reformed United Church of Christ, where Kristin Gerner Vaughn (MDiv ’02) is pastor. “I’m just ecstatic to see this coming to life and to get to be a part of it,” she says of Peacehaven. Some of her congregants are volunteers, willing to work for the future residents — “people we’ve not yet met” — because of Cochran’s and the Elliotts’ vision.

Buck Cochran “stands there with God’s grace on his face and welcomes people,” she says. “He really is living out Pro Humanitate.”