Rescue in the Gulf 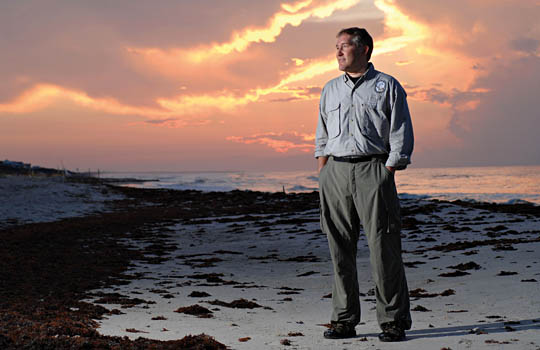 Related: Birth of ‘The Blowout Experiment’

Last April when Brian Yablonski (’89) heard first reports of the catastrophic BP Deepwater Horizon oil spill in the Gulf of Mexico, his heart sank. An avid outdoorsman who has spent seven years helping to set and enforce Florida’s conservation policy, Yablonski knew that the millions of gallons of crude pouring into the Gulf meant big trouble. But instead of being paralyzed by the tragic headlines, he became fiercely energized to defend the coast.

St. George Island, Fla. — Kneeling on the sugar-white sand of a remote Gulf of Mexico beach, Brian Yablonski extends a rubber-gloved hand toward what appears to be a stack of glistening ping-pong balls. “Slow and easy, that’s the key,” says the 42-year-old lawyer and Florida Fish and Wildlife Conservation Commissioner. “When you’re handling turtle eggs, you gotta be careful because the embryos cling to the shells so they can breathe the gases they need for their development.”

A moment later he’s holding one of the ping-pong balls gently between thumb and fingers and transferring it to a high-tech container. Within a few hours, this turtle egg and many others will be rolling in a climate-controlled truck to Florida’s Atlantic Coast, where they’ll hatch and be released into waters safe from the BP oil spill.

It’s tricky work, and Yablonski’s face is already wet with perspiration. “Look at my hands, they’re shaking!” he quips as he concentrates on transferring the loggerhead egg safely. “OK, that one’s ready. Next stop, Cape Canaveral!” He eyeballs the stack of turtle eggs for a few moments, and his broad face lights up with pure happiness. “Have I got a great job, or what?

With these loggerhead excavation and relocation projects, he says, “we’re hoping to save a generation of sea turtles.” 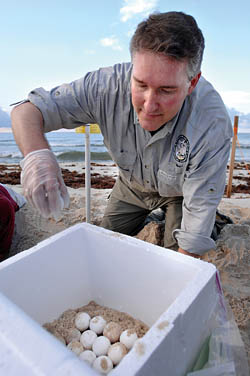 Brian Yablonski: “We need to save as many animals as we can.”

He gazes at the green waters and again to the nest dug by a mama loggerhead weeks earlier. The giant turtles, which can reach up to seven feet and 500 pounds or more, breed at sea before the females lumber ashore to deposit their eggs.

“At the commission, our goal is to serve as the voice of the wildlife,” says Yablonski, “and it’s our responsibility to protect these marine habitats at all times.” As an appointed and unpaid commissioner, he helps direct the agency’s formal conservation activities, which include setting statewide conservation policy, crafting wildlife regulations, enforcing fishing and hunting laws, and now helping Florida respond to history’s largest accidental oil spill in marine waters. He also advocates “doing everything we can to protect our vital natural resources from the oil, and to make sure that the polluter is appropriately punished for the destruction caused by this tragic incident.”

The gung-ho outdoorsman made news in June when he went public with demands for “more and bigger skimmers” and a quicker response from BP for the cleanup. In both his public role and his private life, he seeks to rally Floridians to protect their coastline from the spill — and to make sure that such a disaster never happens again.

It’s dawn on sparsely populated St. George Island, just off the Florida Panhandle near Apalachicola, and the sky to the east is a day-glo swirl of vivid pinks and cream-white clouds. Twenty feet above the purling surf-line, a convoy of 10 brown pelicans goes chugging past. A spooked crab skitters down the sand, and two bottle-nosed dolphins cavort just beyond the waves. For a few minutes on this late-July morning, it’s difficult to believe there are up to 185 million gallons of oil lurking there in the Gulf.

But Yablonksi — a political science major who minored in philosophy at Wake Forest and loves to talk about the “ethical complexities” involved in balancing the needs of “pure capitalism” with the urgent need to protect the environment — is quite aware of the ecological danger. “Right now, we’ve got a tremendous volume of sub-surface oil somewhere out there in the Gulf,” he says, “and nobody knows where it will end up.”

Then, as he lifts another turtle egg to the high-tech crate: “The jury is still out on whether the wildlife will be able to escape a worst-case scenario.” He lists the questions around how the oil might affect marine life, sediments, wetlands “and the water column itself.” Then he pauses to concentrate on adding another loggerhead egg to the batch of 202 that will be rescued here today. “We’ve got lots of questions and no answers,” he says. “But we aren’t going to wait around. As an old-fashioned, conservative Republican, I’ve always been a big Teddy Roosevelt fan… and I like what he said about situations where you can’t know everything but have to act.

“Teddy said, ‘Do what you can with what you have, but do it now’… and that’s the attitude we’ve taken at the commission from day one.

“There will be plenty of time at the end of the day to talk about blame and to talk about ‘who shot JR.’ But right now, we need to act. We need to save as many animals as we can.”

Grateful For A “Massive Army” Of Volunteers

Born in Philadelphia and raised mostly in the Washington D.C. suburbs, where his father was an antitrust lawyer and his mother a public school teacher, Yablonski arrived at Wake Forest in 1985, already a veteran of political life on Capitol Hill. He spent two high school summers as an intern with Rep. Henson Moore, R–La.

As a young man who’d enjoyed the congressional aide’s thrill-a-minute lifestyle, he felt naturally drawn to political science. “I had the good fortune to study under both Professor Katy Harriger (now department chair) and (emeritus Professor) Jack Fleer,” he recalls, “and they were both inspiring. Katy got me interested in constitutional law — which led me to law school later — and Jack assigned me to study the history and politics of Florida in enormous detail.

“Thanks to them, I wound up studying constitutional law at the University of Miami, and then as a gubernatorial policy adviser to Jeb Bush (1999–2002). I’m also grateful I could minor in philosophy… and attend small classes where you couldn’t sit in the back and hide!”

Armed with his liberal arts training, Yablonski, a self-described “highly persistent” young man and a descendant of celebrated labor activists who sought to improve life for coal miners, took a daring step by applying for a White House staff position as a personal assistant and intern to President George H.W. Bush at age 21. Yablonski got the job, and he says it was the president who encouraged him to stay involved in politics — advice that eventually led to his job as Jeb Bush’s policy aide in Tallahassee.

It was there that his passionate attachment to the outdoors (he’s tracked grizzlies in Wyoming and fished for trout in Montana) led him to apply for one of the seats on the commission, to which he was appointed in 2004 and later tapped for a second term, overseeing with his fellow commissioners the state agency that employs 1,900 people and boasts a $300 million annual budget to enforce Florida’s rules for protecting fish and wildlife. Perhaps Yablonski’s most notable achievement on the environmental front in recent years is a successful state constitutional amendment to give private landowners tax breaks for land set aside permanently for conservation. He was the sponsor.

He credits wife Kim, a freelance journalist, with helping him balance his “day job” as vice president for public affairs at the Tallahassee-based St. Joe Company, a major developer in Florida, with his volunteer work on the commission. St. Joe’s visible role in creating new housing developments and other major construction projects in Florida — the company owns 550,000 acres in the state and occasionally has been criticized for lack of environmental sensitivity — might lead some critics to question Yablonski’s ecological allegiances. But as an ardent advocate of “free-market environmentalism” and as a fan of novelist Ayn Rand’s “pure capitalism,” he insists that his publicly owned company has a compelling self-interest in protecting the environment… and that its “market-based” support for defending the state’s natural resources “actually represents the most effective form of environmentalism in today’s complex, global economy.”

Yablonski volunteered for the conservation commission “because I think we have an obligation to serve as stewards of our natural resources.” In fulfilling his role, he has been working with Florida’s official multi-agency team of “First Responders” to track the oil in the Gulf and protect wildlife. Equipped with helicopters, fixed-wing airplanes, dozens of all-terrain vehicles (ATVs) and more than a score of offshore vessels, the First Responders, who represent half a dozen different state agencies, have counted oiled birds, rescued turtles, collected fish tissue samples for federal hydrocarbon testing and performed a hundred related tasks since the disaster began.

“One of the most heartening things about this disaster is the way people from all over Florida have responded,” says the policy wonk-turned-environmentalist over a plate of seafood at Boss Oyster House in Apalachicola. “We’ve got thousands of volunteers and dedicated scientists and conservation officers at work along the Panhandle, and we’ve been amazed to see how they’ve been energized to help the fish and wildlife of Florida.

“We’ve got a massive army out here fighting to save the turtles and the birds — and we aren’t going to stop until it’s safe for them to go back in the water!”