Birth of ‘The Blowout Experiment’ 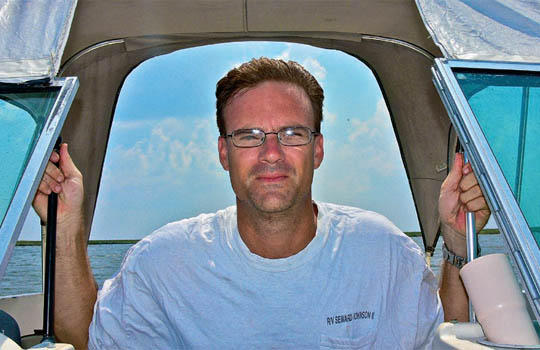 Mark Schrope: ‘There were plenty of grim observations to hold everyone’s attention.’

Related: Rescue in the Gulf

On May 7, I got a seemingly routine assignment from an editor with the news section of the science journal Nature, which I’ve written for as a freelancer for more than a decade. Past articles have taken me around the world from Colombia to Fiji, but usually once the story is done I move on within a few weeks. I had no idea a simple Friday e-mail would transform the next year — and quite possibly more — of my life.

I had already written a quick article about the likely ecological impacts of the Deepwater Horizon disaster. My editor’s new request was that I venture to Louisiana to cover scientists studying the spill.

We settled on a group of oceanographers heading out to the spill zone to gauge how certain areas looked ahead of the oil so that future impacts could be measured, and to figure out where the oil was already going. The only catch was that to join the expedition I needed hazardous waste training — a strict Coast Guard requirement for all entering the zone. Oh, and I’d need to be in the tiny village of Cocodrie, La., two hours south of New Orleans, within less than 24 hours.

After much back and forth discussion about a $1,000 private training course, they finally let slip that I could do it cheaply online. About forty-five minutes later I was driving from my home in Melbourne, Fla., to the airport.

The training never mentioned the word oil, but it was as boring as tar. I had to run out an eight-hour clock to get my certificate, so I stayed logged on every chance I got, including walking through airports, but I made it to Cocodrie in plenty of time.

Once at sea, my job was to send daily blog posts via the ship’s satellite connection and then do a two-page article for the magazine’s next issue. Things happened so quickly that I was on the 115-foot R/V Pelican, owned by the Louisiana Universities Marine Consortium, before I started to wonder if the work would be interesting enough to sustain the blog. It turned out I needn’t have worried.

There were plenty of grim observations to hold everyone’s attention. Our first day out we saw streaks of reddish-brown oil in various forms, some dotted with dead jellyfish known as by-the-wind sailors. That night the dozens of response ships at the spill lit the sky like a small city. As we steamed that direction the next morning, the stretches of thick oil grew larger, and an overpowering smell of oil at times filled the ship. As a native Floridian with many fond memories of the Gulf, they were painful views.

The most pivotal moment came on May 13. That’s when instruments revealed what appeared to be oil in some form trapped about 3,000 feet down. The finding came as a shock because most people, including BP, expected all the oil to float. From that point on, all the team’s work focused on tracking the deep plume of what turned out to be very diffuse oil droplets and methane, traces of which stretched for more than 20 miles out from the crippled wellhead.

News of the discovery spread quickly around the world after I reported the find, but it’s possible that a New York Times article that went out two days later had more to do with that than my blog posts.…

The day I got home, I did an interview with Rachel Maddow on MSNBC, a show I had never even seen because, to my children’s dismay, we don’t have cable. Later that night, a literary agent contacted me and asked if I had considered doing a book on the spill. I hadn’t, in part because I was in the early stages of developing another book.

But my academic and personal background seemed a perfect match for the story, depressing as it is in many ways. We decided to move forward. I continued to cover the spill for Nature, while frantically putting together a book proposal, which led to a deal with Rodale in July. The book is tentatively called “The Blowout Experiment: Tracking the Oil, Science, and Stories of the Gulf Catastrophe.“

I’ve now flown across the spill zone on a research flight, traveled to remote fishing villages in Mexico to learn about the aftermath of a similar spill in 1979, and made multiple trips to the Gulf with my 1974 Wellcraft powerboat to see the impact of the oil spill on beaches and marshes — and people — firsthand.

Over the next several months I’ll be tagging along on more expeditions into the Gulf, and I’ll continue exploring the coast and meeting with the many people affected by this disaster. For those interested in following along, visit www.TheBlowoutExperiment.com.