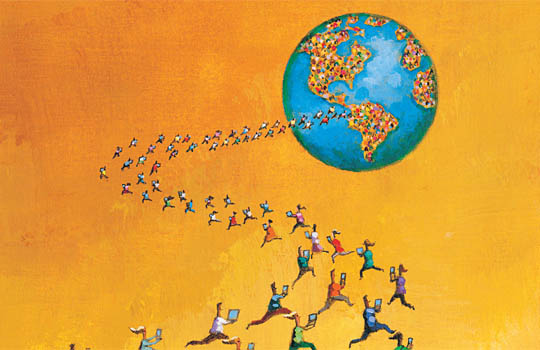 It used to be when people wanted to change the world they petitioned, rallied or marched in the streets. If they wanted friends they joined a book club or a block party. They got their news from papers, their entertainment from television and their career leads at company picnics or PTA meetings.

Then came the Internet and the social media revolution: Facebook, Twitter, YouTube, MySpace, Foursquare, Flickr, LinkedIn and blogs upended the way humans interacted. Suddenly they lived in a world where they could be a friend, fan and follower without ever leaving the house. They could be an opinion leader on global hunger or the corner deli’s menu.

The connective and collective power of grassroots social media helped elect an American president, generated millions of dollars in pledges for Haiti earthquake relief and landed 88-year-old comedian Betty White a job as guest host of “Saturday Night Live.” She kicked off the show with a thank-you for the viral Internet campaign on her behalf and joked, “Needless to say we didn’t have Facebook when I was growing up. We had phonebook, but you wouldn’t waste an afternoon with it.”

Social media networks have become essential communication tools for tapping into primal urges to entertain, interact, belong, create, rally online and—as many organizations and businesses are discovering— serve the human cause. According to Internet guru Clay Shirky, the potential civic value of social media’s hitherto untapped energy is nothing less than revolutionary. “Instead of lamenting the silliness of a lot of online social media, we should be thrilled by the spontaneous collective campaigns and social activism also emerging,” he said in an interview with the Guardian online earlier this year.

“The whole, ‘Is the Internet a good thing or a bad thing?’ We’re done with that. It’s just a thing. How to maximize its civic value, its public good—that’s the really big challenge,” he says.

Several Wake Forest alumni are embracing the challenge. They understand social media’s transformative power and are using it for philanthropy, education and activism. One is Jessica Jackson Shortall (’00), a City of Joy Scholar, Peace Corps veteran in Uzbekistan, Oxford University MBA and celebrated volunteer at Wake Forest who founded Homerun, a student organization that provided meals to the elderly and homebound and expanded into a national network called Campus Kitchens. Based in Austin, Texas, she is director of giving for TOMS Shoes and regularly blogs about the company’s One for One movement that donates a pair of shoes to a needy child for each pair a customer buys.

In Atlanta, one of Twitter’s most active cities, Lindsey Hardegree (’06), with a double major in theatre and English, tapped into social media to create a grassroots publicity and educational campaign for the Tony Award-winning Alliance Theatre. 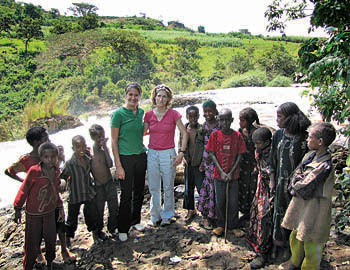 Shortall says TOMS Shoes uses social media not only for business but also for social impact. It has donated more than 600,000 pairs of shoes to children in developing countries since May 2006. TOMS uses blogs, video, Facebook and a live Twitter feed on its website to present an intuitive way for the company to connect and converse with people who support TOMS, buy TOMS, and spread the message for the movement.

“Talking to those people about our giving has to be a part of that conversation because our customers are more than just customers—they are an integral part of the movement, our mission, our impact, our long-term sustainability and what we’re trying to achieve,” says Shortall.

In developing countries, diseases transmitted from the soil to bare feet are a leading cause of illness. What’s unusual, and rewarding, about TOMS is that the “giving” message is not separated from product messages, she says. You might see a tweet about a new line of wedges followed by a tweet about giving partners in the field. “Often, businesses’ charitable activities are put in silos where the social impact activities are seen as byproducts,” says Shortall. “They are not spoken of in the same voice, by the same people to the same people. With TOMS, it’s one and the same.” 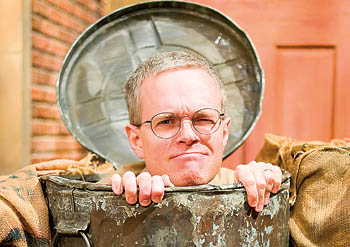 Russell Shilling in Oscar the Grouch’s trash can.

In his work for the Department of Defense, Russell Shilling developed a program to help children in military families cope with multiple deployments and physical or psychological injury in parents returning from combat. Properly developed social media can have a positive impact by providing guidance and social support to those in need—especially in rural or underserved areas, Shilling says. Sesame Street Family Connections produced 700,000 DVD kits for parents and children that feature Elmo from the Muppets and his family working through sensitive issues such as separation, injury, loss and grief, at a level comfortable for children.

On the Family Connections website, military families can post messages, share and create artwork, and upload photos and videos. Parents can create a private account for family and close friends to interact in a Sesame Streetthemed environment during deployments or other separations. Their Sesame Street friends will also leave children messages on the site.

Shilling recalls that his three mentors at Wake Forest—Professors Lee Potter (English), Bynum Shaw (’48) (journalism) and James Dodding (theatre)—taught him to make connections between seemingly unrelated ideas, theories and technologies. “The truly transformative impact of social networks will be realized when they are combined with other interactive media that can help educate, reduce stigma and actually supplement traditional therapy and human interactions.” 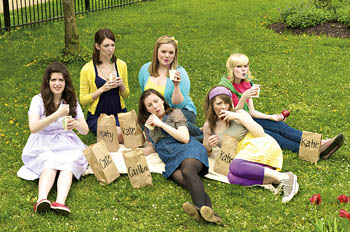 Kate Lambert (in aqua sweater) and other members of the Katydids

While Shilling’s work with Sesame Street seeks to soothe emotions, in Chicago Kate Lambert used social media to incite them. A theatre major who essentially lived in Scales Fine Arts Center after winning a role in “HMS Pinafore,” Lambert regarded the proposed demise of a theatre in her city as an outrage. She and a group of fellow actors called The Katydids (all with variations of the name Kate) made a video to protest planned destruction of the historic iO theatre, a place for up-and-coming comics and where Tina Fey, Amy Poehler and Seth Myers got their start. The theatre, located near Chicago’s Wrigley Field, became a teardown target in what opponents called “The Malling of Wrigleyville.”

With an established Facebook following in place, The Katydids wanted to do their part by representing the theatre community’s opinion of the proposal. Lambert conceived the idea to use their collective comedic skills to make a video satirizing demolition of iO and its impact. “All of the women in the video, including myself, are regular performers at the theatre, so it made sense to fight back the best way we knew how… with comedy,” says Lambert. Their video, posted on YouTube, was the improv version of a town-hall meeting and caught the attention of the Chicago Sun-Times, which linked to it in an online edition.

Although the Chicago Planning Commission ultimately approved demolition of the iO to make way for commercial development, Lambert says the power of social media shed light on an issue in a way that would have been impossible through any other medium. “Actors and writers who utilize social media like YouTube are participating in their own form of electronic theatre,” she says. “It has become a way to share causes, much like a modern-day town hall meeting.”

Of course, she adds, you have to make sure the cause doesn’t stay online. “It’s easy to click a ‘Like’ button and say you support an issue and leave it at that. In order for something to actually take flight, you have to have people who are not complacent and who are willing to step away from their computers and do something.” 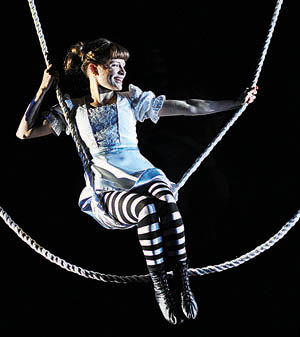 Alice (Lindsey Noel Whiting) above the stage in “Looking-glass Alice”

If the world of social media spins on axes of audio and video, then performing arts organizations have a huge advantage, says Lindsey Hardegree who developed an awareness campaign for the Alliance Theatre in Atlanta, where she is events coordinator and board administrator. She started the theatre’s Facebook page and began sharing production photos, reviews and behind-the-scenes information. In nine months the site had 1,800 followers. A Twitter account, which included a live-tweeting event during a performance of “Lookingglass Alice,” drew a similar response. Other initiatives included engaging local “mommy bloggers” as they neared the opening of a children’s show “Mulan” and an a cappella video competition on YouTube that coincided with the run of the a cappella musical “Avenue X.”

“People want to know who is behind the product or organization they are connecting with, and social media can provide a more casual and real representation of who they are,” says Hardegree. That’s especially true for the nonprofit sector, she says, which needs to cultivate advocates willing to volunteer, donate money and spread the word about the organization’s mission and good work. “Social media connects us, and in a world where it is so easy to become disjointed, I think connection and relationships grow more valuable every day.”

Whether those connections are built through friending, following, tweeting or texting, social media add a new dimension to the spirit of service embodied at Wake Forest.