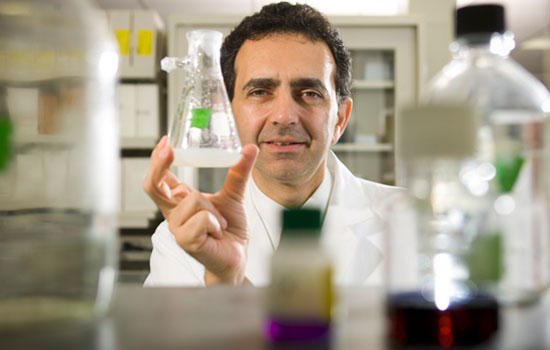 A special feature of Wake Forest Magazine.
by Kerry King (’85)

THE LATEST ANNOUNCEMENT by the medical school’s Dr. Anthony Atala — that his team of researchers had discovered a new source of stem cells in amniotic fluid that could be used to produce a variety of tissue types — drew national attention and was cited on the floor of Congress by those for and against embryonic-stem-cell research.

Atala, along with colleagues from the Wake Forest School of Medicine and Harvard Medical School, reported that they had used stem cells drawn from amniotic fluid to create muscle, bone, fat, blood vessel, nerve, and liver cells in the laboratory.

Their findings could lead to breakthroughs in replacing damaged cells and tissue in treating patients with spinal cord injuries, diabetes, and Alzheimer’s, but preliminary tests in patients are still years away.

“Our hope is that these cells will provide a valuable resource for tissue repair and for engineered organs as well,” said Atala, a senior researcher and director of the Institute for Regenerative Medicine. Atala’s findings — the result of seven years of research — were first published in January in the scientific journal Nature Biotechnology.

Atala and his colleagues reported that they had discovered that a small number of stem cells in amniotic fluid — estimated at 1 percent — can give rise to many of the specialized cell types found in the human body, although they aren’t sure exactly how many different types. “So far, we’ve been successful with every cell type we’ve attempted to produce from these stem cells,” he said. The newly discovered cells may represent an intermediate stage between embryonic stem cells and adult stem cells.

The Senate had yet to take up the issue by late January. Both sides in the House debate used Atala’s research to support their positions, even as he cautioned that amniotic stem cells should not be considered a replacement for embryonic or adult stem cells. “It is essential that National Institutes of Health-funded researchers are able to fully pursue embryonic-stem-cell research as a complement to research into other forms of stem cells,” he wrote in a letter to Congress.

Atala’s announcement was the latest advance in regenerative medicine to come from his team since he moved to Wake Forest three years ago from Harvard University. Last year, he and his colleagues rebuilt bladders for seven young patients using tissue grown from the patient’s own cells.