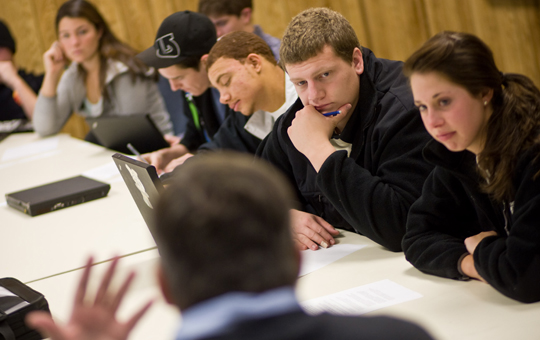 Student’s in Anders Greenspan’s first-year seminar study the role of men in America.

Myths of manhood and masculinity

It might be a man’s world, but that world orbits men’s roles and image. In his seminar “American Manhood,” which he taught this fall, Anders Greenspan examined issues of manhood and masculinity in the United States from the middle of the nineteenth century through World War II and how the nation’s myths of manhood helped to define what it became.

In the 1840s and 1850s, being a man meant marriage, a stable family, a secure job, and an engaging social life. “In the decades just before the Civil War, men began to migrate from rural areas to cities in large numbers,” says Greenspan, a visiting assistant professor of history who holds a doctoral degree in cultural history from Indiana University. “Typically, they worked as clerks in business and professional offices. Life became less manual and more intellectual.”

Then the War Between the States erupted — and manhood became something entirely different. “Being a man suddenly meant proving your masculinity on the field of battle,” he says. “‘Masculinity’ became a quiet bravery; a conquest of personal fear and cowardice.”

The settlement of the West in the quarter-century after the war brought to the fore the qualities thought to be necessary to tame the wilderness — ruggedness, adventurousness, fearlessness, will, independence, strength, and so forth. But as Greenspan notes, the closing of the frontier with the Oklahoma Land Rush of 1889, coupled with the increasing urbanization and industrialization of the nation, which were seen by many as corrupting influences, caused many men to struggle with what it meant to be a man in the modern era.

As a soldier, explorer, and outdoor sportsman, Theodore Roosevelt projected an image of rugged manliness, and he used his bully pulpit as a war hero and president to exhort American males to cultivate character through masculine pursuits like hunting and horseback riding, and to excoriate weaker elements of society that he said would sap the nation’s vigor. By pursuing an aggressive foreign policy, Roosevelt projected his personal notions of manhood onto the country’s collective identity and aroused its passion for military, cultural, and economic hegemony.

According to Greenspan, American men after the turn of the century turned, curiously enough, to Harry Houdini and Tarzan as models of manhood. The former appealed especially to the nation’s burgeoning immigrant population and was a vibrant symbol of escape — in a metaphorical sense, from everyday life — while the latter represented, for men struggling in an urban jungle with loss of independence and self-sufficiency, a return to a natural, pristine state.

Greenspan notes that American manhood took a hit during the Jazz Age and the Depression. During the twenties, ambiguous morals and gender roles and literary characters like Jay Gatsby who were not what they seemed once again called into question what “manhood” really was. And during the Depression, the inability of so many males to support their families devastated their sense of their own masculinity. But manhood came back strong during World War II, when men discovered renewed purpose in upholding and defending lofty ideals of liberty and justice. “Manhood became ennobled,” Greenspan says. “It meant doing something for more than just yourself.”