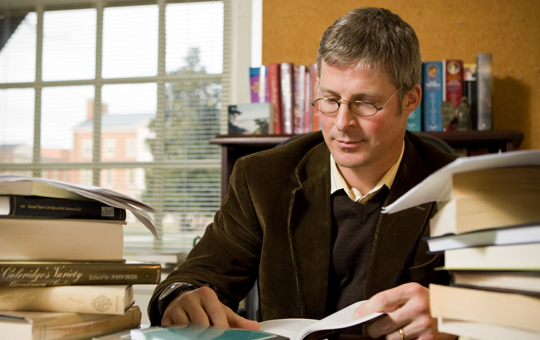 In his first-year seminar on “Melancholy Androids: On Emotion and Artificial Humanoids,” which he’s teaching this spring, professor of English Eric G. Wilson (MA ’90) asks his students, “What makes Pinocchio sad?”

A curious question to some, perhaps, but not to a Romanticist by inclination and training, for whom esotericism idealism, and melancholia are recurrent themes. And certainly not in a seminar that explores the impulses behind the creation of artificial humans, or androids — from monsters like Frankenstein’s to puppets like Pinocchio and all the golems, automatons, robots, cyborgs, and various forms of artificial intelligences in between.

“There is a continuum of reasons why people [in myth, religion, literature, and film] create living machines,” says Wilson, whose book The Melancholy Android: On the Psychology of Sacred Machines was published in 2006. “For some, the intelligent machine represents transcendence of human limitation. For others — anegocentric scientist motivated by selfish sadness and the desire to replicate a lost loved one, for example — it is the overcoming of matter and death.In either case, there is something profoundly sad inherent in it.”

Among the possibilities that Wilson invites his students to consider are the idea that machines might be more human than humans and the notion that some humans are really machines. Wilson — a film lover and scholar whose recent book examines transcendental irony in the films of David Lynch — found his intrigue with these questions piqued by the classic science fiction film Blade Runner, based on a Philip K. Dick short story entitled, “Do Androids Dream of Electric Sheep?” “In the story, the ‘replicant’ [android] Roy Batty can think more clearly and feel more deeply than Deckert, the ‘blade runner’ [cop] who hunts him down,” Wilson notes. “It also offers the possibility that Deckert himself might be a replicant.”

Other films besides Blade Runner the class is viewing are the original 1932 version of The Mummy, Fritz Lang’s futuristic silent film Metropolis, and Steven Spielberg’s A.I. Among the assigned texts are Victoria Nelson’s essay “The Secret Life of Puppets” and Mary Shelley’s novel Frankenstein. Course requirements include several short essays, a longer research essay, and oral presentations.

So why is Pinocchio sad?

For the answer, Eric Wilson invites our consideration of an 1810 essay on the fall of man by Heinrich von Kleist. The essay, called a “The Marionette Theater,” proposes that the primary reason for the fall was self-consciousness.

“Before Adam and Eve ate from the tree of the knowledge of good and evil, they knew only unity — with their garden environment, with each other, and with their God,” Wilson notes. “These harmonies fostered the most pleasing harmoniousness of all — unity with self; the feeling that thinking and acting are one, that awareness and spontaneity are not disjointed.

“However, after Adam and Eve ate from the tree, they immediately suffered fracture, a break with environment, each other, and God,” he goes on. “These divisions caused them to become self-conscious and see themselves not only through their own eyes, but also through the eyes of others. Whereas before they were perfectly at home with their bodies, after the fall they became aware of how others might view their nakedness. They covered themselves with fig leaves, hiding their shame.”

With this idea of the fall in mind, von Kleist presents a dancer, Mr. C., who claims, rather startlingly, that humans pining for a return to the garden have much to learn from puppets. “Mr. C. claims that puppets dance with perfect grace because they lack affectation,” Wilson notes. “At one with themselves, untroubled by self-consciousness, puppets always maintain a perfect center of gravity. They move as Adam and Eve moved before they ate of the forbidden fruit. This elegance, says Mr. C., reminds us not of humans, who are awkward and clumsy, but of gods, forever agile and comely. Neither puppet nor god is vexed by the fracture that bedevils human beings: the break between effortless being and partial knowing that gnaws; between lithe anatomy and the mind’s turbulence.”

Von Kleist’s essay illuminates the nature of artificial humanity, in Wilson’s estimation. “Not violations of divine law nor blasphemous efforts to become as gods, virtual human beings — puppets, and also other humanoids, such as androids, automata, robots, and cyborgs — are in truth fulfillments of human potential; symbols of perfection to which breathing lungs and beating hearts and self-conscious minds can only aspire,” he states. “Indeed, these kinds of machines, smooth in their movements and devoid of doubt, highlight what humans are doomed to suffer — twitchy gestures and disconsolate skepticisms. Humanoid machines are double. They are at once holy paragons calling us to prelapsarian dignity, and difficult memorandums recalling our distance from grace.”