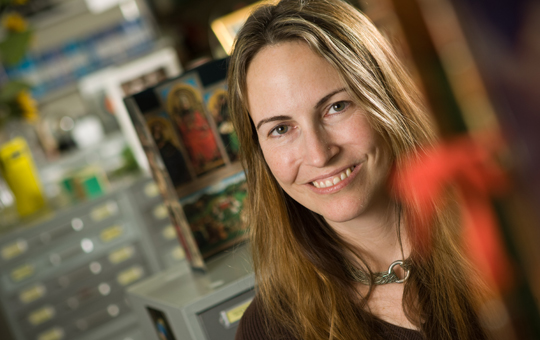 Elizabeth Howie’s first-year seminar focuses on the hardscrabble life in the Old West.

The aesthetics of commerical sex

In Elizabeth Howie’s seminar, the Old West is a land not of myth but of hard knocks and a hardscrabble existence for women. Prostitution flourished in its frontier towns and mining camps, and photographers captured in portraiture its practitioners, many of whom had traveled west to become seamstresses or to pursue promises they’d been given of dancehall jobs, only to be impressed into a trade that offered privation and the risk of abuse or death at the hands of the rough customers they serviced.

Those images, along with metaphorical paintings and photographic portraits of prostitutes in New York, Paris, New Orleans, and other venues in the mid-nineteenth to early twentieth centuries, were the subjects of “Fallen Women and Fine Art: The Aesthetics of Commercial Sex,” taught by Howie this fall.

Howie, an adjunct assistant professor of art history, used the subject material to train her students to look closely for clues and subtleties in works of art and as a topic for exploring larger themes, such as urbanization, colonization, and the changing status of women. “The students were wonderful,” she says. “We were circumspect in our approach to the material, but still, we looked at some difficult images, and they remained equanimous and respectful throughout.”

Howie explains that in nineteenth-century Europe, bourgeois women were not supposed to exhibit any hint of sexuality. “They were to be the ‘angel of the house’ — to care for the children and household, period,” she says. “Men were supposed to preserve the virtue of their wives by satisfying their urges with prostitutes. Among the lower classes, as males from rural areas flooded into Paris looking for work, they left their women behind. It was said that for poor Parisian women, purity was not always an option, meaning prostitution often was their only recourse. As a result of all these factors, prostitution was viewed by social commentators as a necessary evil.”

Necessary or not, depicting prostitutes in artwork was implicitly forbidden, so the more daring avant-garde artists — especially the Impressionists, who began to burgeon in the 1860s — resorted to visual metaphors, according to Howie. “Nudes were tolerated as long as they were of classical subjects such as goddesses,” she says. “Édouard Manet broke ground [in 1865] with his painting of a nude, reclining Olympia, which he intended to be a subtle but undeniable euphemism for a prostitute.”

Howie points to Picasso’s Demoiselles d’Avignon (1907) as another historical anchor for any discussion of the representation of prostitution. “[In the work,] Picasso was responding specifically to Matisse’s Joy of Life, a dreamlike utopia of freedom and a lack of inhibition depicted with simplified curvaceous nude forms in an abstract landscape,” she says. “It invites the viewer in. By contrast, the Demoiselles fractures space and presents women’s bodies not as inviting, but as aggressive or even monstrous. The viewer cannot enter the space, and the prostitutes are far from acquiescent and beguiling, even though they pose lasciviously. In its presentation of prostitutes, which is violently de-idealized, it has been described as making fun of male desires.”

Laundresses and milliners were among other visual substitutes for prostitutes by virtue of the domestic settings of their labors and, in the case of laundresses (painted famously by Edgar Degas), loose clothing. “Many Impressionist works, such as those portraying beautiful young women dancing in dappled sunlight with dashing young men, actually signified situations related to prostitution,” Howie explains. “Degas’ ballerinas were another. [With all of the artistic stand-ins], one couldn’t always tell [in real life] who was a prostitute and who wasn’t. Honest women would be accosted on the street as a result.”

The painting of prostitutes was likewise not tolerated in America’s formal art circles, but that didn’t discourage adventurous artists and photographers from depicting them — and in not-so-subtle ways. John Sloan, a member of the Ashcan School of social realism painting at the turn of the century, lived in New York’s notorious Tenderloin District and was himself married to a prostitute. His unabashed and non-judgmental paintings depicted the ladies of the night as leading generally glamorous and carefree lives.

The photographic portraits of Storyville prostitutes by the famed E.J. Bellocq, as well as those by various itinerant photographers in the West, are striking in their revelation of the unashamed and confident — even defiant — aura of their subjects. Unglamorous, rugged-looking, and typically unattractive, they tended toward eccentric clothing and idiosyncratic names like Squirrel Tooth Alice and Crazy Horse Lil. It was a man’s world, and the women who lived in it did what they had to do and became who they had to be.