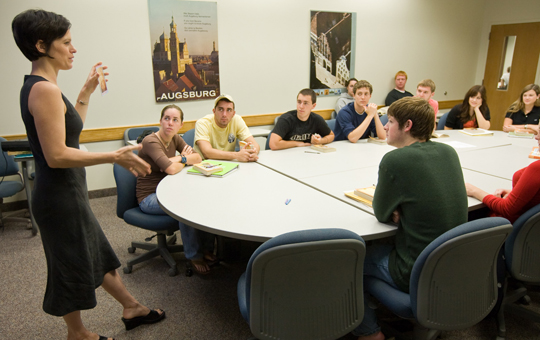 Alyssa Howards’ class examines the vastness of space and its effect on national consciousness.

The American frontier and national identity

Alyssa Howards was raised in Bellingham, Washington, within a half-day’s horseback ride of the Canadian border. Bellingham might not have been the frontier, but you sure as blazes could see something resembling it from there. As a child, she adored the books of Laura Ingalls Wilder and anything written about horses. Shane was her favorite movie and she relished the fishing trips she took with her father to the wilds of Montana. By location and inclination, she was a girl of the golden West through and through.

Years later, as a budding scholar, she turned her attention to Germany, where she discovered…the West. In the pulp fiction and travel journals of German writers of the nineteenth century, she found renewed ardor for the American frontier. Sometimes, it seems, the farther you go, the closer you get to home.

Howards, now an assistant professor of German at Wake Forest, instilled her frontier fervor this fall in a seminar titled “Wide Open Spaces: The American Frontier and the Formation of National Identity.” Through fictional and non-fictional accounts of the American frontier, the seminar investigated how the nation’s distinctive history of settlement and westward expansion contributed to the formation of American culture, and how its past continues to influence our self-perception.

As a doctoral student in German literature at Washington University in St. Louis in the late nineties, Howards read the works of Karl May, a prolific and hugely popular nineteenth-century German novelist whose sixty books have sold an estimated 100 million copies and have been translated into more than thirty languages. May’s tales of the West, which centered on the adventures of a noble Indian named Winnetou and his virtuous German blood brother, Old Shatterhand, enraptured the German people. “Theirs was a small country, and they were captivated by the wide open spaces of the American West,” Howards notes. “Industrialism was gaining momentum, a scary prospect for many. The tribes of the American Indians paralleled their own tribal past. At a time when antimodern sentiments were growing, the novels of May aroused [in readers] feelings of longing and nostalgia.”

Themes explored in the seminar included the vastness of space and its effect on national consciousness; the origins and nature of American violence; the role of women then and now; and the impact of myths like Manifest Destiny and limitless expansion on how the rest of the world views the United States today. Among the classic novels of the West the students read were Wilder’s The Little House on the Prairie, Owen Wister’s The Virginian, Willa Cather’s O Pioneers!, and Walter Van Tilburg Clark’s The Ox-Bow Incident. The latter, a tragic story of prejudice and vigilantism, prompted a lively discussion of its parallels to immigration issues today.