A Member of the Family 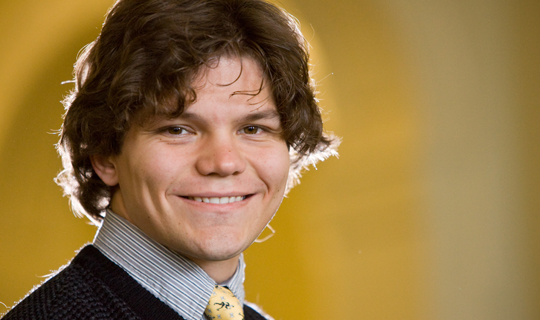 My hope today is to present myself as evidence that money donated to scholarships at Wake Forest is used constructively. I would like to begin by thanking those who made these financial awards possible.

Using the words of my advisor and friend, I was asked to tell you a story. So, I will do my best to keep this from being a speech. I’d like to be candid with you so that you may better understand where I’m coming from.

When I began the sixth grade, my family lost our home and many of our possessions. This downward spiral continued for at least another year, at the end of which we owned a car and little else. My sister left home and dropped out of school, and I was left to watch my mother distance herself from my father and me. She left without warning the spring of my freshman year in high school.

Slowly, my father and I got back on our feet. We worked a few odd jobs for our church to make ends meet, and eventually my father began to work again as a contractor. I remember cutting school to work with him because I wanted to help out. We were a team, and I did what I could. I didn’t know where my mom was or how to contact her, and this brought me enormous grief through my high school years. Dad sent her what money we had and, because of this, ate Ramen noodles three times a day for almost a year.

During high school, my father and I grew very close and forged a bond that I could not fully appreciate for many years. My father was born a ‘brittle’ diabetic — which means he has difficulty regulating his blood sugar under any circumstances, and at times has to take between four and six shots per day. As he approached middle age, he lost many of the warning signs indicating that his sugar was falling, which was especially dangerous at night. I awoke countless times to find my dad comatose, and I spent many of these nights pouring syrup into his mouth to keep him alive.

He helped me study and encouraged my scholastic excellence. I resolved early in high school to go to college and did the best to prepare myself. I had no advisors, just intuition. I asked for difficult classes and participated in extracurricular activities that I felt would set me apart from my peers. Most importantly, I wanted to go to college to show that it could be done.

I got a job and spent the bulk of my time working and studying. When I wasn’t working nights or studying, I worked with my dad.

When the time came to fill out college applications, I applied to UNC and Wake Forest, with a few other schools as backups. My guidance counselor insisted that chances were zilch that I’d get into Wake Forest, and slim to none I’d be accepted to Carolina. My SAT was not high enough, neither was my GPA or my class rank. The winter of my senior year was very bleak. I wasn’t going to get into any of the schools I applied to and, even if by some crazy chance I was accepted, I could not afford to pay the tuition. I could barely afford to pay for the Advanced Placement tests, the SATs and the application fees.

I had almost forgotten the Wake Forest application. I mailed it knowing full-well I wasn’t going to get in. And despite the fact that it was the only school I could attend while at home (so I could still care for my father’s diabetes), I knew I could not afford the tuition.

A few weeks later, I was surprised to learn that Wake Forest had accepted my application. I had $130 or so to my name, and my dad had maybe $300 when I filled out the financial aid forms that the application required.

On my own, I could not afford to go here. I showed up almost four years ago needing a handout, and you generously gave me about 75 percent of tuition through grants and scholarships. This year, you awarded me over $8,000 in additional scholarships.

I spent the past three years working about thirty hours per week while attending school full-time. I spent about all of my time working and studying. At one point my sophomore year, I had three parttime jobs: one at a Domino’s Pizza in Davidson County, one running a skate park in Clemmons, and working for my father.

My father is married now, and I have taken advantage of the opportunity to live on campus for what may be my last year of study. I resolved to be a normal Wake Forest student this year. The football game against Florida State was the first I’d ever attended. I am very involved on campus and have been able to make some friends and experience a part of Wake Forest that I never saw much.

Four years ago, I came here as a senior in high school to get an application from the small building near the Reynolda Road entrance. I was driving an ’84 Nissan wearing sweatpants and an oil-stained t-shirt. A Mercedes parked next to me and the four men who climbed out made a point to shake my hand and introduce themselves. They were wearing ties, and I had assumed they’d sidestep me on the way in. I hope that maybe they are here today.

On the first day of class three years ago, a cute freshman in a new Porsche parked in front of me in the satellite lot. She too introduced herself and even walked me to class, as I had never been to the campus, except to pick up my new laptop.

These two stories sum up my tenure at Wake Forest. You have all taken me in and accepted me as part of the Deacon family. I know now that I was supposed to go here. I am a Deacon.

I want you all to know that I am forever indebted to you and this institution for the kindness and generosity that has been shown. Thank you. I do not feel I deserve the money or the ability to go here. You have seen something in me that for many years I did not see in myself. If you feel that you made the right decision helping me become a Deacon, I want you to know that there are a number of children similar to me. They only need you to believe that they can succeed, as you have done for me.

Download “A Member of the Family” [PDF] from the March 2008 issue of Wake Forest Magazine.