Well Versed: The Winds of Change 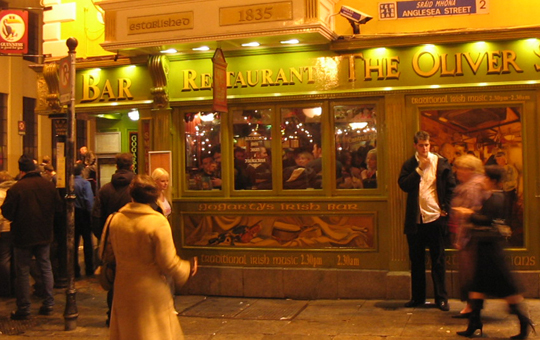 “Dublin asked itself if it wanted to be Boston or Brussels. For the most part, it chose Boston,” says Director of Wake Forest Press Jefferson Holdridge.

Ireland in the 21st Century

“Ireland, and the whole question of ‘Irishness,’ are changing profoundly, and this extends to its poetry,” says Holdridge, a native of the northeastern United States who traveled to Dublin for his brother’s wedding in 1981 and ended up staying for a year of study at a house for American students at the School of Irish Studies, a private institution staffed by faculty from University College Dublin, the renowned “Catholic college” of James Joyce and Gerard Manley Hopkins, and Trinity College Dublin, the traditional bastion of the Protestant gentry. “The eighties were one of Ireland’s lowest points in the post-war era. The economy was dismal, and just as during the Famine, emigration parties were held for friends and relatives leaving the country. The London Times printed a photograph of one of the University of Dublin’s graduating classes and circled the two-thirds of the class that was emigrating.

“The hard times, though, made Dublin a cheap and bohemian place, much like Greenwich Village in the fifties,” he goes on. “Poetry flourished then for that reason; rents were low and writers could live by working as critics. Once, the Chieftains gave us a private concert at our residence. It wasn’t unusual for one of our instructors to adjourn an evening’s class to a local pub. I loved it.”

When push comes to shove — when we want to say something truly important — we turn to poetry. Candide Jones, assistant director and manager, Wake Forest Press

Dublin still possessed much the same charm when Holdridge returned in the early nineties to resume his studies after spending five years in New York as a student, teacher, and editor. But it wasn’t very long before the metamorphosis began. “The EU [European Union] came and Ireland made good use of it,” he points out. “The global service economy that relied upon computing needed an educated work force and Irish universities had always been free or at least very cheap.

“[Economically] Dublin asked itself if it wanted to be Boston or Brussels,” he says. “For the most part, it chose Boston, and the consequences soon became apparent. A house that sold for 40,000 euros in 1989 sells for a million today. Whereas Dublin traditionally had been a strolling city where people shared a rich social life on the streets, today social life has been privatized with dinner parties and many traditional values and skills have been lost. Church attendance has plunged from 90 percent in the early nineties to less than half today. Dublin has been overwhelmed by traffic and road rage is common.”

Ireland’s economic miracle has had another outcome: an influx of foreigners into a historically homogeneous and xenophobic population. “A lot of people have resettled in Ireland in recent years, from Poland in particular,” he notes. “There are many more blacks today, and racism has become more evident. In the eighties, I rarely heard English accents in Dublin. By the late nineties, they were common. The situation has a dual nature to it. Ireland has been invaded so often throughout its history that it has assimilated many different cultures. But perhaps because of that, [the Irish] are deeply suspicious of foreigners and tend to be very clannish, even in the cities.

Irish poets, like their country, are torn between the sod and the world. “Irish poetry is famous for the poetry of The Troubles, as all of the most prominent contemporary poets, with a few notable exceptions, are from the North,” says Holdridge, an associate professor of English who teaches four courses a year in Irish literature on the graduate and undergraduate levels. “But there are also the international and local models. The former, of which Paul Muldoon and Derek Mahon are exponents, follow in the footsteps of Louis MacNeice [1907-1963], an urbane poet of the world who focused on international themes. The latter, of which Heaney is a prominent example, dwell more on distinctively Irish concerns in the tradition of Patrick Kavanagh [1904-1967], whose poems spoke of the narrowness and frustrations of rural Irish life in the last century. Joyce and Yeats used both [models] — that’s what made them great. In fact, the best work of any Irish writer employs both models.”

The Press generally publishes five or six editions a year and has been buoyed by a $35,000 award from the National Endowment for the Arts to function as the North American publisher of an anthology of Northern Irish poetry titled The New North this year. But Holdridge and Assistant Director and Manager Candide Jones (’72, MA ’78), who has been with the Press since 1990, note that sales overall are flat, and they are devising strategies for bolstering the bottom line. One is to publish anthologies featuring the work of several poets instead of editions dedicated to one. “In 1999 we published our first anthology of [Irish] women’s poetry, and it’s been the book that’s garnered the most attention of late,” notes Jones. “It has encouraged us to get more into anthologies. In 2005 we released Volume I of The Wake Forest Series of Irish Poetry featuring five poets who had not been widely published in North America. Results have been encouraging and we’re working now on Volume II, which will be a very important title for us. The women’s anthology has been used in classrooms a lot, and we think the academic market will be increasingly vital.”

On the expense side, Jones says the Press has published limited collector’s editions of selected titles to counteract the rising cost of printing hardbound books, which some poetry lovers prefer. It also is investigating the feasibility of printing on demand to hold down the size of its inventory, already one of the largest among all poetry presses in America. Whatever changes the future might bring on the business side, the stewards of Wake Forest Press are committed to sustaining the viability of something larger. “When push comes to shove — when we want to say something truly important — we turn to poetry,” Jones says. “It’s how we communicate at our deepest level. In that sense, what we do [at the Press] is important spiritually.”