A supplement to Wake Forest Magazine

‘Why I Believe in Wake Forest’
‘Since I was 16 years old, my life has been so intertwined with Wake Forest that I cannot think of myself as other than a ‘believer,” writes Provost Emeritus Edwin G. Wilson (’43).

Brought to Light
Long-hidden letters enable professors Miki Felsenburg and Helga Welsh to unearth their own buried pasts and bond over a shared tragedy.

A Pioneer in Interdisciplinarity
Women’s and gender studies has grown tremendously — in numbers of students, faculty, and scholarship — in its first three decades. Professors Mary Foskett and Perry Patterson and seniors Matt Triplett and Velvet Bryant describe the progress thus far and the challenges ahead in their own words.

Worlds in the Making: A National Symposium
Wake Forest hosts a national symposium on creativity in March. Guest speaker David A. Edwards offers some tantalizing thoughts about creativity in this interview.
chemistry

Building the Nation’s Premier Collegiate University
Wake Forest released its new strategic plan for the Reynolda Campus last fall. A series of white papers available only online describes each of the priorities.

Encouraging Women in Science
Associate Professor of Chemistry Rebecca Alexander is encouraging the next generation of female scientists. 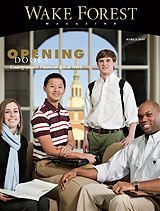