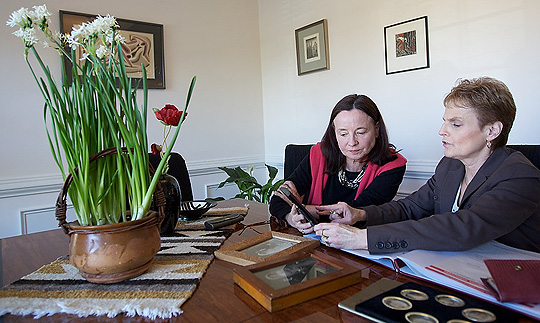 Long-hidden letters enable two Wake Forest professors to unearth their own buried pasts and bond over a shared tragedy.

Not long after Miki Felsenburg (MBA ’78, JD ’91) joined the law school faculty in 1994, she brought her elderly mother, Gertrud, from Denver to live with her in Greensboro. A month-and-a-half later, Gertrud was dead.

It was quite a while before Felsenburg, who today is an associate professor of legal writing, could bring herself to go through her mother’s personal effects. When she finally did, what she discovered transformed her life by bringing a bittersweet but blessed measure of closure to her painful legacy.

In the process, she discovered common ground with another faculty member — Helga Welsh of political science — whose own legacy intersected with Felsenburg’s in a very real and tragic sense. Together, they formed a bond of friendship from healing and hope.

In a poignant program aired on Wake Forest’s public radio station, WFDD, in late 2008, Felsenburg and Welsh discussed their remarkable story. Many of the quotes in this article are drawn from that program and used with permission.

Felsenburg’s father and mother, Kurt and Gertrud Mendl von Felsenburg, were Viennese Jews who fled the Third Reich just before the borders were sealed in the early forties. They made their way to the United States, where they dropped “Mendl von” from their name, had their only child, Miriam Esther (Miki), and prospered professionally, she as a psychologist and he as the chief accountant and comptroller for the Colorado State Patrol.

Gertrud Felsenburg was an accomplished woman. She earned a doctorate in psychology from the University of Vienna (where she took a course from an elderly Sigmund Freud) at a time when Austrian universities marginalized women. She was a founding member of Colorado’s professional psychology association. Yet, as her daughter observed, she exuded a deep-seated sadness. And although she was known as an open-minded and tolerant woman with a special sense of compassion for minorities, she was extremely bitter toward Germans.

Among Gertrud’s personal effects was a red wallet she was using at the time of her death. Tucked behind the flap where folded money could be hidden in billfolds of that vintage were three onionskin letters, disintegrating from age and repetitive unfolding and refolding. The ink of the handwriting had bled through both sides of the paper, rendering them virtually illegible. About all that Felsenburg could decipher was that they were in German and were all in different handwriting.

Although her parents almost never talked about it, Felsenburg knew that her mother’s brother and other members of their extended family had perished in the Holocaust. She suspected the letters were from her grandparents but there was no way to be certain without a translation.

A short while before discovering the letters that day in 1999, Felsenburg had met Welsh, an associate professor of political science, at a social gathering. “I knew from her accent that she was German, and since we were both members of the faculty, I thought I would ask her if she could help me with the letters,” Felsenburg recalls. Welsh, a native of Lenggries, a small town in the Bavarian Alps near Austria, says she always welcomes an opportunity to use her native language.

En route to their meeting, Felsenburg suddenly was struck by the possibility that Welsh’s family could have been involved in the war, or even have been Nazi Party members. “I told her that these letters were from my grandparents who had died in the Holocaust and to feel free to decline [translating them] if she had any hesitation whatsoever,” Felsenburg recalls. “Helga was so warm and gracious. She said, ‘Miki, we both must face that this happened. It’s a long time ago now, so let’s see what these letters say.’”

All three letters were written in late 1941, after Kurt and Gertrud had arrived in the United States. One was from Gertrud’s father, another was from her mother, and the third was from Kurt’s father.

In his letter, her father rebuked Gertrud for not having done more to secure, while they were still obtainable, exit visas for her now-trapped family back in Austria, which Germany had annexed in 1938. Her mother’s missive tried to mitigate the severity of her husband’s letter. “He is simply bitter,” she wrote. “Beyond your own strength you cannot act. For me, the whole issue is past; I can live with it.” By contrast, the letter from Kurt’s father, a well-to-do lawyer who had financed his son and daughter-in-law’s flight to Holland, was filled with jokes and trivialities of the day.

“Though we started the afternoon reading the letters as near strangers, we ended it as friends,” Felsenburg says. “While we read, both of us wept, not because they had died, but because of the humanity we all share. Here they were, facing death, and my grandmother takes time [in her letter] to show pride in her daughter by asking about the dress and hairstyle she would be wearing to a psychology conference she would be attending.

“[After reading the letters] it is easier to understand why my mother was such a sad woman,” she continues. “In addition to the survivor guilt that I believe every Holocaust survivor had, she also had this very direct blaming from her father that said, ‘Why haven’t you done more for us,’ when she was desperate to do everything she could. Whatever she could do, she did, but it was simply not enough. When she finally obtained permission for her parents to come to the U.S. in 1944, they had already been dead for two years, though she did not know it until after the war was over.”

The letters helped Felsenburg fill in the holes in her knowledge of her family. “My parents, like so many Holocaust survivors, simply refused to speak about it,” she says. “What few details I learned emerged when my friends would ask her questions. My mother would be too polite to refuse to answer at all, so she would give a few grudging details. She was simply too sad to talk about it. My father was a completely different personality — a lively, optimistic, joke-telling kind of guy. If you asked him a question, he simply couldn’t remember. It was ancient history to him.”

Back in Germany, families like Welsh’s also talked little about the Holocaust and the war years in general, but for different reasons. Her mother married in 1937 and soon had two children, but her husband served in the German army and never returned home. After the war she subsisted by doing laundry for the American occupation forces in her town before marrying her second husband, Josef Hundegger, in 1951. Welsh was born a year later.

“In my family, and really across Europe, people didn’t talk about World War II and the Holocaust,” Welsh says. “Forgetting was almost a way of life.” Still, she knew that her father had been drafted into the German army and fought in the war. “The first time I noticed was when I was seven or eight,” she says. “We were swimming, and I saw his scars from having been severely injured on the Russian front.”

For a long time, Welsh was reluctant to probe too deeply. “On the one hand, you want to know what your parents did during this period,” she notes. “But on the other, you’re afraid to know something you really don’t want to learn. They’re still your parents and you love them, but if they were Nazis, how do you live with this knowledge?

“It took me a very long time to have the courage to ask my father if he had been a member of the Nazi Party,” Welsh adds. “I was sixteen or seventeen when I finally did. It was an enormous relief when he said no.” She and her father remained extremely close for the rest of his life. “He probably had the greatest influence on my life of anyone I’ve ever known,” she says. “He died in 1985, two months after I received my Ph.D. He was very proud of that.”

Amid tragedy, a lesson of hope

Felsenburg was surprised to learn that a silence as suffocating as the one that had enveloped Jewish families also had smothered Christian families. “It had never occurred to me that there was an entire generation of German children who had suffered on account of the Holocaust [as a result of their] resentment of what their parents had done,” she says, “and who also had a past that could not be talked about.”

Through other letters she eventually obtained, Felsenburg was able to piece together the fate of her grandparents. To care for her husband, who had been shell-shocked in World War I and was emotionally handicapped as a result, her grandmother willingly boarded the train that carried both of them to the death camp at Sobibor, even though circumstances were such that she could have eluded transport, at least temporarily. They were exterminated in early 1942, but it wasn’t until 1946 that Gertrud learned for certain of their deaths.

Despite being only five feet tall, Felsenburg’s father, Kurt, was drafted into the U.S. Army and was sent to Europe, serving for a time in the region of Bavaria where Welsh grew up. He and Gertrud were divorced in the early sixties. His second marriage lasted for more than thirty years, up to his death in 2000, but Gertrud remained single for the rest of her life.

Both Felsenburg and Welsh have reflected deeply on the profound outcomes and larger implications of their coming together.

“It’s a story of hope — that one can reach out and reconcile differences,” Welsh says. “It doesn’t mean that one can forget; it means that generations can move on and come to grips with something that is very hard to understand.”

Adds Felsenburg: “The gift Helga gave me is almost indescribable. It gave me a sense of my grandparents — and an understanding of my own parents — that I absolutely never had. A lovely irony that comes of all of this: here, today, we find ourselves close friends — the German daughter of a Nazi-era soldier, and the Jewish daughter of survivors of the Holocaust. How could we possibly not derive hope from that?”

Special thanks to WFDD News Director Kathryn Mobley, who produced the program, and Station Manager Denise Franklin for their gracious permission for use of material.