Gender and social sciences in the midst of a financial crisis 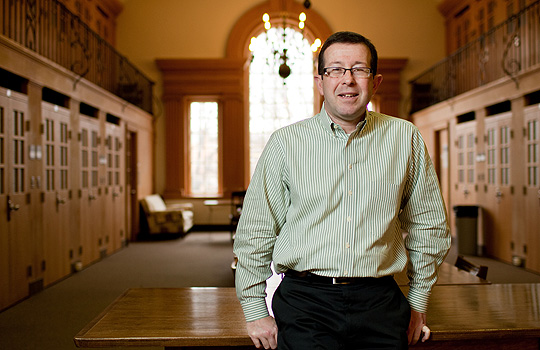 Perry Patterson says he hopes that students in mixed-background and mixed-gender settings come away with a greater sense of the possibilities for interdisciplinary work.

Were it not for the ongoing financial meltdown, Americans might remember the recent Presidential election as one fairly dominated by issues of race and gender.

In particular, much ink was spilled over the Hillary Clinton and Sarah Palin candidacies, raising questions about how these women “should” speak in public, or how they “should” combine public roles with private family lives. Less was said on these fronts regarding the male candidates, reflecting some generally tacit assumptions that men “naturally” play a large public role, and one with relatively limited family commitments.

Attention has now shifted away from gender issues to the financial meltdowns centered in New York and London (from where I wrote these comments). But perhaps that change of focus has been overdone, as feminist approaches have much to say about the economic theory underlying much of modern capitalism as we know it, and offer important insights on items ranging from the bonuses paid to the CEOs of failed banks to the day-to-day issues faced by women working in the financial markets to the strength of market versus social forces in determining wages, access to jobs, and overall social inequality.

For the last seven years or so, I have taught a course entitled “Economics for a Multicultural Future,” and last semester taught a version of that course in the UK at Wake Forest’s Worrell House program in London. Many diversity- and gender-related questions are raised in that course, including: Under what conditions are markets likely to produce outcomes free from discrimination in wages, hiring, and promotion? Under what conditions are non-market forces such as human psychology and social conditioning important for the determination of economic outcomes? And, what aspects of standard economic theory need modification in the presence of such phenomena as gendered roles in the workplace and the household, “winner-take-all” wage setting, and possibly non-rational behavior on the part of economic agents, including both consumers and firms (and their very human managers and employees)?

Answers to questions such as these should not be seen as simple ones. One major focus of my work with students on such questions has been to reveal the underlying theoretical complexities involved. A second—and equally important—focus has been empirical. My students are always asked to confront their opinions about how the world works with self-gathered and self-analyzed empirical data. Over the years, they have asked: whether firms that hire more women, or that approach gender parity in terms of membership on the board of directors, do better or worse than those that remain dominated by men only; whether states, regions, or nations that are more racially diverse or that have more gay and lesbian citizens do better than those with more homogeneous populations; and even whether universities that seem to practice more affirmative action in admissions rise more in the rankings than those that do not.

For the record, the outcomes of such investigations, whether conducted by my students or by Ph.D.-holding researchers, have been surprisingly mixed. Thus, in addition to more “mainstream” economic approaches to understanding the origins of the present financial crisis, we are right to ask—as feminist authors have—whether the treatment of women or other non-traditional players in the major financial institutions has been a relevant factor in the outcomes we currently observe.

The process of conducting such investigations and raising such feminist-inspired questions also plays an important function in the classroom. Such questions challenge economics students to interrogate the assumptions of standard theoretical models and to explore more deeply the implications of statistical results.

At the same time, students from a traditional Women’s and Gender Studies perspective experience an introduction to the methods of social science that they might otherwise miss. My hope is that all the students in such mixed-background and mixed-gender settings come away with a greater sense of the possibilities for interdisciplinary work, and with a greater appreciation of each other’s perspectives and abilities. In an era of crisis where one financial leader has called for “all hands on deck,” I hope this is an approach that can help prepare a generation of truly thou