A supplement to Wake Forest Magazine

One-to-One: Teachers learn, learners teach
Faculty. Student. Engagement. These three words, when put together, take on many meanings at Wake Forest. They mean that senior Monica Giannone discovered that her true passion is studying the religious and political complexities of the Middle East while hashing out the ethics of war with her advisor.

Life After College
“The current generation of college students faces greater challenges than ever before,” says Andy Chan, vice president for career development. “The world of work has become increasingly complex, changing and uncertain. Subsequently, students are tentative insecure, and unprepared to make career choices.”

Rediscovering an 18th-century poet
English professor Claudia Kairoff has received an NEH grant to compile the first complete scholarly review of the works of poet Anne Finch, perhaps the most important woman poet of the early 18th century.

Homegrown answers for Africa
Associate Professor of Economics Sylvain Boko, an expert in economic development in Africa, worked with more than 20 other development experts for his newest book, “Back on Track: Sector-Led Growth in Africa and Implications for Development.”

Making sense of the census
Associate Professor of Sociology Ana Wahl, who studies housing patterns and racial integration in neighborhoods, explains the importance of the census, why fewer people may complete this year’s survey, and how she uses census data in her research and teaching.

Call of Duty
Many college students play video games for fun, but a group of Wake Forest students has stepped beyond the game-playing role to educate peers and parents about the latest releases. They maintain a blog called VGameU, which reviews and rates about a dozen games based on the level of violence, potential addictiveness, and entertainment value. 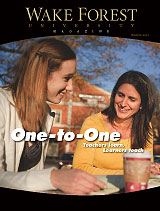