Fighting the fear of melancholy 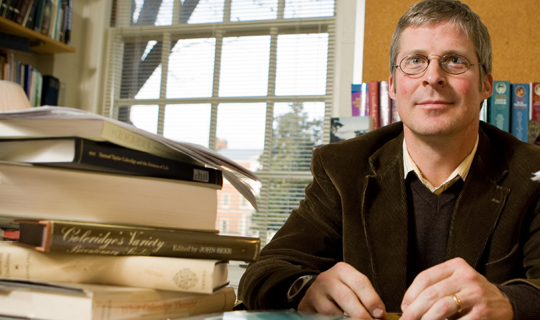 Professor of English Eric Wilson’s latest book, “Against Happiness,” is a provocative and exploratory investigation of America’s fear of melancholy.

From Newsweek to the New York Times, and The Wall Street Journal to the “Today” show, English professor Eric Wilson has challenged the status quo with his most recent book Against Happiness: In Praise of Melancholy — a work that questions whether an obsessive desire for happiness is stagnating American culture. According to Wilson, equating happy with good and sad with bad has led to seeking one and shunning the other, and the consequence of this preoccupation with contentment, he says, may be the extinction of the creative impulse.

“My fears grow out of my suspicion that the predominate form of American happiness breeds blandness,” Wilson writes. “Melancholia generates…a turbulence of heart that results in active questioning…a perpetual longing to create new ways of being and seeing.” And this emotional discomfort, Wilson says, has inspired the creation of many of the greatest works of art ever produced.

The way to appreciate life — the way to keep from taking life for granted — is to embrace the rough spots. Eric Wilson

Against Happiness offers diverse examples of artists, writers and musicians whose achievements were products of their examination and experience of the most profound sorrows of human existence. Vincent van Gogh, Virginia Woolf, Herman Melville, John Keats, Beethoven, Joni Mitchell and John Lennon are offered up as instances where angst and great creative genius have partnered. Rather than considering sadness as a state to be avoided, Wilson suggests that embracing the melancholic mood can be an opportunity to sift through the difficulties of life, accept and acknowledge the pain of incompleteness and fragmentation, and find the courage and resolve to embrace life’s dichotomies.

“To me, joy grows out of melancholy, the idea being that a fully lived, fully human life is a complex mixture between joy and sorrow. My book is really a call to live a deeper life by sitting with and exploring melancholy. It is a call to temper the active life with the contemplative life. We need to slow down and think more deeply. American culture has a fear of melancholy, a fear of contemplative life. My heroes of melancholy would be out of place in today’s culture where the inner life is undervalued.”

Wilson, a member of the English department since 1998, is an authority on the Romantic period and the writing techniques in Against Happiness often rely on literary tools of that time. “In this book, I make statements that can’t be backed up with proof and statistics. When I thought about writing this work, I wanted to write using the essay styles of Emerson and Thoreau that were meant to inspire reflection, discussion and self-examination.”

In addition to being controversial, the book is also decidedly personal. “It took me two years to finish Against Happiness and it includes my whole personal and intellectual life.” During a brief stint at West Point after high school Wilson says he discovered his secret brooding side. “By day I was a soldier, by night I would read Somerset Maugham’s The Razor’s Edge by the light on my Casio watch. The book opened up for me that a rich life could be had.”

Eric Wilson explores melancholy in many of his scholarly publications. In Against Happiness, he puts these ideas before a general audience, hoping readers will consider that exploring difficult and sometimes painful issues can often lead to growth.

How adaptable are you? Professor of psychology William Fleeson says the choices we make can affect the way we feel.

Eric Wilson talks about “Against Happiness: In Praise of Melancholy” on NBC’s Today show.

Listen to Eric Wilson on National Public Radio’s Talk of the Nation.

Essay adapted from “Against Happiness: In Praise of Melancholy”
The Chronicle of Higher Education