Q & A with Christian Miller 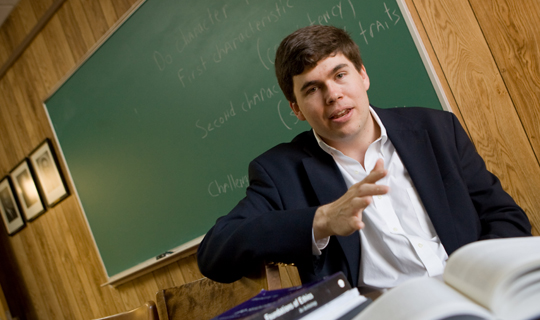 Christian Miller, assistant professor of philosophy, researches whether character traits influence behavior or if human behavior is largely a product of environment and circumstance.

What is it about character traits that interests you?

People talk about character all of the time. We say that a certain person is dishonest or courageous. We call one person loyal or trustworthy and another lazy or unreliable. I think of myself as a shy person. That is part of my character and explains why I behave in certain ways. But over the past 50 years, a number of experiments in social psychology have seemed to suggest that our behavior is largely a product not of what character traits we might have, but rather of the situations we find ourselves in. In other words, it is not personality characteristics, but rather environmental variables that seem to have the most significant impact on explaining our behavior.

Can you give an example of how character traits might be irrelevant to a situation?

One example is the “Good Samaritan” study by John Darley and Daniel Batson (Journal of Personality and Social Psychology, pg. 27 (1973)). Students at Princeton Theological Seminary were told that they had to give a lecture on the parable of the Good Samaritan in another building. Along the way to deliver the talk, students encountered a person slumped against the wall, and the main variable was that some of the subjects were told they were running late for their lecture whereas others were told that they had plenty of time. You might think that if the students had the character trait of compassion, they would stop to help no matter what because that is part of their character. But what seemed to be the factor mainly influencing their behavior was the situational pressure they were under. Unrushed seminarians helped 63 percent of the time while those told they were running late and had to hurry helped only 10 percent of the time.

Another famous example is the Milgram experiment conducted by Yale University psychologist Stanley Milgram (Journal of Abnormal and Social Psychology, pg. 67 (1963)). Essentially, students volunteered to be “teachers” and administer a test to another person. For each wrong answer the “teacher” had to turn a dial which was thought to administer an electric shock to the “learner.” The more wrong answers the greater the shock. Although the student participants thought they were shocking the test-takers, the “learner” in the other room was purposefully answering a number of questions wrong but was not being harmed. If the student participant conducted the test alone, he or she would typically stop administering “shocks” when it seemed to be getting painful for the “learner.” But when a scientist figure in a white lab coat was standing behind the volunteer encouraging him or her to administer the “shocks,” many subjects would continue turning the dial all the way to the seemingly lethal level while hearing screams of pain coming from the other room. The main implication from this study seems to be that it was the external pressures of the situation that influenced the subject’s behavior and not his or her personal character traits, such as compassion.

Isn’t this study of more interest to psychologists than philosophers?

Yes, but a number of philosophers have recently become interested in them as well and are trying to see what implications can be derived from these studies. For example, some philosophers claim that we can now conclude that virtues, vices and other traditional character traits do not exist and instead are a fiction. After all, we would expect compassionate people to help others in all sorts of circumstances precisely because they have the trait of compassion. But social psychology studies are showing that consistent and widespread helping behavior is not very common. So perhaps traditional character traits do not exist in the first place.

But you’re not so sure this is true.

I too have been trying to determine what philosophical implications can be legitimately inferred from these experiments. And I think it is overreaching to suggest that studies in social psychology show that there are no traditional character traits at all. I have been specifically focused on compassion and helping behavior and it seems to me that the more restrained conclusion is that the data suggests only that many (but not all) people are not compassionate. And, given human history, this is not a bold claim to make.

So are most people simply disinterested in the well-being of others?

Contrary to the philosophers mentioned above, I think there are character traits in the neighborhood of compassion that many people do have. One such trait is a global helping trait. This is a trait that, when activated in one of several ways, will strongly incline people to help. For example, when subjects are put into a good mood they are much more likely to help, and similarly when subjects empathize, feel guilty or are embarrassed they are much more likely to help. But if they are not experiencing these “triggers,” then by and large, control subjects will not help. Thus a number of people do not have compassion per se, since the virtue of compassion would be activated regardless of whether a person is, for instance, in a good mood or not. But it is not unreasonable to think that many people have a related trait of character which does dispose them to help, provided that it is appropriately triggered by something like guilt, good mood or empathy.

What does it mean for philosophers if character traits turn out to not exist?

Some philosophers look at the psychology literature today and it seems to indicate to them that there are no traditional character traits. This implies that there are no virtues or vices, like compassion, and hence the prominent theory in ethics called “virtue ethics” — which has as its centerpiece the notion of virtue and vice rather than rules or consequences as the key elements of ethical theorizing — is going to be in big trouble. So that is an example of taking the psychology literature in a direction that the psychologists themselves would not go in. My own conclusion is that it is a mistake to infer from these studies that there are no traditional character traits and hence virtue ethics is not in danger here.

But what does this mean to us in everyday life?

But if character traits do not exist and external pressures are largely responsible for our behavior it may be much more difficult to legitimately hold people accountable for their actions. The Milgram studies were done to see how it could have been that so many German citizens during World War II so readily adopted the Nazi framework. How were seemingly ordinary people transformed into concentration camp executioners or guards? According to a more situation-driven mentality, there were just lots of external pressures coming down on these ordinary people, and when you put people under significant pressure from authority figures you can manipulate them into committing all kinds of terrible acts. Determining where responsibility really lies is critical in preventing atrocities like these from occurring in the future.

You might expect that a compassionate person will always act compassionately, but experiments in social psychology suggest this isn’t always the case. Chrisian Miller studies whether character traits exist and what this means for personal responsibility.

What good is melancholy? English professor Eric Wilson explores how working through sadness is an important part of life in his book “Against Happiness.”

How adaptable are you? Professor of psychology William Fleeson says the choices we make can affect the way we feel.

Christian Miller and his research interests and published articles.