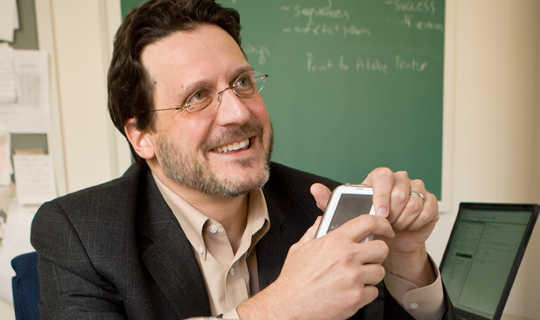 Associate Professor of Psychology William Fleeson’s research focuses on the process approach to personality, which suggests that individuals have a wide range of possible personalities and are able to call on certain character traits to take the most advantage of a situation.

Choices may affect the way we feel and behave

While English professor Eric Wilson reflects on the melancholic disposition and the connections between such qualities of mind and creativity, William Fleeson, an associate professor in psychology and researcher in personality, has been making news in Allure, Self, Fitness, Caring Today and the American Psychological Association Monitor on Psychology. His research focuses on whether pensive sadness is an inherent part of one’s nature or if people have more control over their behavior and emotions than once thought.

Instead of having a specific personality we’re born with, we get into habits of behaving. We feel as if we’re behaving out of natural instinct but what we’re really doing is performing the same mental interpretations and reactions over and over. William Fleeson

“Personality is often thought of as something you’re born with it and it causes you to act a certain way,” says Fleeson. “Theorists who approach personality from this structural perspective believe a person has a certain way of behaving, and although he or she may be able to override it on occasion, personality is part of nature. I’m not sure that’s true. An alternative approach, one that I’m interested in, suggests that personality is active and flexible.”

Fleeson has been testing and researching the idea that it is possible for people to gain some measure of control over their lives by improving outlook and attitude. To study this theory, groups of students, both introverted and extroverted, have helped. “In one of our labs, we asked subjects to be either talkative, energetic, assertive, adventurous and bold, or we asked them to be quiet, passive and unadventurous. We had subjects do a 10-minute discussion, and when they were done with the discussion we asked them how much fun they had during the experiment. It was a huge difference. Those in the extroverted condition could be heard laughing and having a great time. It didn’t matter if they were introverts or extroverts to begin with, acting extroverted made them have more fun instantly.”

Extroversion and introspection are not mutally exclusive

There is some misunderstanding of the nature of introverted and extroverted personalities. Since the days of Carl Jung’s research on personality, people often contrast outgoing, extroverted activity with introspective, contemplative behavior. “Jung believed that extroversion was determined by whether a person is outward or inward looking. It was a good theory that turned out to be wrong. There’s been a lot of research in the last 10-20 years that has made it clear that extroversion versus introversion is about the contrast between being active, energetic, adventurous, assertive and somewhat sociable versus being quiet, passive, timid, submissive, and somewhat unsociable. A person can climb a mountain — a very extroverted thing to do even if it’s done alone — and can be very introspective while doing that. Introspection is not part of the distinction between extroverted and introverted, and that’s hard to get over.”

Fleeson’s research suggests that by taking a walk, talking to someone, singing aloud or dancing to music, it might be possible to work through feelings of anxiety and sadness. “People who are in better spirits may be more likely to see the world as a place that will allow them to do what they want, and therefore they often accomplish more. That’s a pretty positive effect.”

What good is melancholy? English professor Eric Wilson explores how working through sadness is an important part of life in his book “Against Happiness.”

Seven ways to be happier
Shape