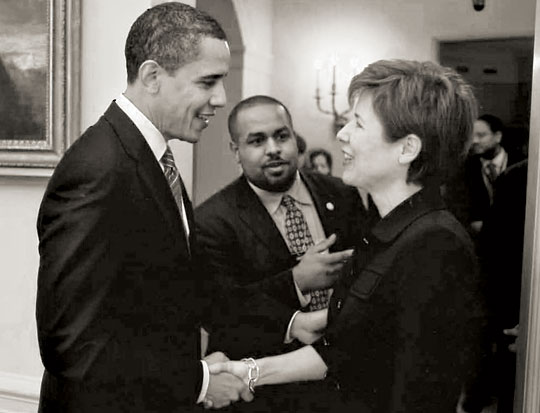 Melissa Rogers (right) is greeted by President Obama at the White House.

This has been an extraordinary year for Melissa Rogers, director of the Wake Forest School of Divinity Center for Religion and Public Affairs. In January, she received a high-profile appointment to chair the President’s Advisory Council on Faith-Based and Neighborhood Partnerships. That same month, she spearheaded the publication of a landmark joint statement on the role of religion in public life. The national spotlight has been so bright that she has even been called a member of President Barack Obama’s “spiritual cabinet,” but that’s a label she politely declines.

“I’m not a personal spiritual adviser to President Obama, but I can say that the president appreciates religious freedom not only as a constitutional concept but also as something that enriches his own experience as a person of faith,” Rogers said. “President Obama knows that, for faith to be vital and have integrity, the government must respect both sides of the First Amendment’s religious liberty coin—the prohibition against governmental establishment of religion and the protections for the free exercise of faith.”

Religious liberty is an issue that Rogers knows well. In her role at the divinity school, she has examined the contributions religious and secular communities make to the common good and the need for religious liberty for people of all faiths and none. For much of the last year, she has focused on developing recommendations for the president on strengthening governmental partnerships with nonprofits, both religious and secular, to serve people in need.

“I had the great honor of chairing this extraordinary advisory council, helping us work toward the completion of our final report, which we delivered to President Obama on March 9, 2010,” Rogers said. “There are over sixty recommendations in the report that would bring about meaningful change in the lives of people who are struggling, both at home and abroad.”

The report covers issues ranging from domestic and global poverty to climate change. Rogers says the wide range of topics helped her develop a new appreciation for the great variety of partnerships. “Whether it is Benefit Banks helping to ensure that people receive all the benefits to which they are entitled, or Fathering Courts assisting dads as they seek to create pathways to better relationships and support of their children, there are many effective and innovative models that deserve more attention and support,” she said.

In addition to chairing the council, Rogers was charged with studying how the Council on Faith-Based and Neighborhood Partnerships could strengthen its partnerships with secular and religious nonprofits. “At times it was challenging to identify and craft recommendations that all council members could embrace in this area,” Rogers recalled. “Nevertheless, through extended deliberation, we were able to unite around a long list of recommendations that we believe would bring about important reforms of the existing system.”

Rogers already had plenty of experience bringing diverse groups together in finding common ground. For the last several years, she had been working with religious and secular leaders in drafting the most comprehensive joint statement to date of current law on issues dividing church and state.

The culmination of their work came in January when Muslim, Jewish, Sikh and Christian leaders from the evangelical, mainline and Catholic traditions joined with civil liberties leaders to issue “Religious Expression in American Public Life: A Joint Statement of Current Law,” published by the Wake Forest School of Divinity.

Members of the drafting committee included those associated with faith-based groups as diverse as the Union of Orthodox Jewish Congregations of America, the Islamic Networks Group, the Baptist Joint Committee for Religious Liberty, and the General Conference of Seventh-day Adventists. Former staff members of the ACLU and People for the American Way also served on the committee.

“Some of these groups are often on opposite sides of church-state litigation,” Rogers said. “But while the drafters of this document may disagree about how the legal line should be drawn between church and state, we have been able to come together and agree in many cases on what the law is today.”

Rogers says her experiences over the last year have fueled new ideas for research and also inspired plans to bring much of what she has learned back to the classroom. She also aspires to bring together diverse groups within the Wake Forest community to engage in interdisciplinary work in the area of social service partnerships between the government and secular and religious groups.

“Wake Forest experts in social science, political science, law, divinity and religious studies have insights and contributions to make, and bringing them together for common conversation will help us to understand this field better, including the possibilities and tensions associated with various sorts of partnerships,” she said.

So while her year has been extraordinary in many respects, Rogers continues to find opportunities in the ordinary course of her work to support the University’s motto, Pro Humanitate, service to humanity. “Given Wake Forest’s longstanding commitment to service and community-building, its nationally recognized leaders in all relevant disciplines and its faith heritage, the University is positioned to play a powerful role in convening stakeholders for discussions that will benefit the common good,” she said.