The Lighting of a Fire 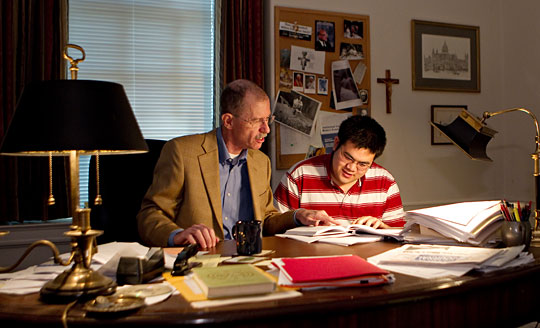 For more than a century and a half, Wake Forest has been dedicated to the liberal arts. Its mission, to educate students in the fundamental fields of human knowledge and achievement, encourages them to ask “why” and evaluate evidence, to be open to new ideas, and to understand the perspectives of others as they pursue truth.

The demand for Wake Forest’s distinctive brand of education is now greater than ever. In an age of fragmentation and polarization—in which almost anything is possible and nothing certain—young people are often thrown back on themselves for direction and purpose. They are looking for integrity: how to bring together the often-incoherent facets of their lives as reflective persons, aspiring professionals, consumers, family members, sports fans, volunteers and citizens.

Wake Forest does not shy away from using any part of students’ experience as an opportunity for learning and growth. The University’s commitment to education of the whole person means nurturing graduates who are prepared with deep academic background and an active commitment to make a difference in the world.

“It’s a complex world in a very challenging time, and one of the most important duties of our university is to educate students to be able to understand the nature of that world,” says Simeon Ilesanmi (JD ’05), Washington M. Wingate Professor of Religion and Director of Graduate Studies. “Students should not leave here just as mere technicians. They must also be infused with the knowledge of their place in history, so as to understand where they stand in the stream of knowledge. In my mind we all have a responsibility to combine the knowledge of science, technology and business with the desire and quest to engage in the moral discourse required to give greater meaning to our collective life.”

Ilesanmi already sees this initiative taking hold throughout the university. “As an institution devoted to cultivating the whole human mind, we recognize that matters of moral understanding elude disciplinary specialization. This work requires a collaboration of scholars from many intellectual disciplines. In this way, we are better positioned to cultivate in our students the critical intelligence necessary to understand the more general human implications of our deepening yet fragmenting knowledge. Simply put, what we are seeking to do is to teach ethics across the curriculum, to make every class and every subject a context for raising questions of values and questions of meaning.”

One of the main lessons to be learned in today’s global economy is that knowledge is no longer compartmentalized, and therefore Wake Forest’s approach needs to be supple and holistic, says Wanda Balzano, assistant professor and director of the Women’s and Gender Studies program. In order to go out into society as prepared citizens of the world, she says, our students must realize the importance of interconnectedness and interdisciplinarity.

“What is the difference between creating technicians and intellectuals? The first thing that comes to my mind is W.B. Yeats’s famous saying that ‘Education is not the filling of a pail, but the lighting of a fire.’ The challenges and rewards at Wake Forest are centered around this fundamental concept and we, as educators, each in our own units, try to teach students in a learning environment what ‘lights that fire’ by integrating rigorous inquiry, creative imagination, reflective engagement with society, and a commitment to fashioning a more humane and just world.” Balzano says this approach produces a diverse and pluralistic learning community, and a genuine ongoing intercultural dialogue.

David Coates, professor of political science and Worrell Chair in Anglo-American Studies, believes emphatically that the students coming out of Wake Forest must be well-rounded intellectually.

“What we need are genuinely renaissance men and women who are socially and politically engaged. In times of economic and social trouble, politics tend to become angrier, and it’s up to intellectuals to maintain the kind of civil, democratic discourse this country was built upon—to lower the heat and increase the light.”

He adds, “Our students will go out from here, and within a relatively short space of time occupy crucial intermediate—and eventually leadership—positions in major American institutions. These are the people who will oversee the repositioning of the United States globally in the new 21st century,” he says. “I think America is at a crossroads, at a moment at which our ability to play a progressive global role is seriously under challenge. It’s going to fall to this generation to be particularly aware of where the U.S. sits historically as well as contemporarily.”

A theme that seems consistent across all disciplines is a desire and need to push students outside of their comfort zones. Melissa Rogers, the director of the School of Divinity Center for Religion and Public Affairs, points out how important this is in her department. “Contemporary religious leaders need to be prepared for constructive engagement with those outside the church house doors.

They need to wrestle, for example, with competing ideas about religion’s role in our increasingly pluralistic society and confront contrasting perspectives about the moral and ethical dimensions of public affairs. If we don’t help divinity students prepare for this kind of engagement, we are not equipping them for religious leadership in the 21st century.”

How do she and her colleagues accomplish this? “Many of the classes I co-teach have a component in which the students travel to Washington, D.C., and meet with a diverse set of religious and civil liberties leaders, governmental officials, think tank scholars, journalists, and others who shape national conversations about the moral and ethical aspects of public policy as well as religion’s role in public life. Thus, these trips help expose students to the rich debate on these subjects and spur them to develop their own framework for thinking about these issues. We believe these experiences and their reflection on them will make them better leaders, whether they ultimately become pastors, chaplains, or community organizers and activists.”

In some cases, educating the whole person means taking a class far beyond its normal subject matter—not only pushing students outside of their comfort zones but also forcing them to look inside at their values. Dan Hammond (’72, P ’08), Hultquist Family Professor in the Department of Economics, does just that in his natural resources class. While the syllabus might focus on environmental economics, the class quickly learns they are also getting some other lessons.

Hammond also believes it is critical to get students to break down the walls between the different courses they’re taking. Otherwise, they quickly get in the habit of compartmentalizing, separating what they’re learning in different classes. “They go to my class and they’re focused on economics. Then they go to another class that contradicts what I’ve just taught them. And instead of challenging, or questioning the different viewpoints, they accept both as fact because they just want to succeed in each individual class. They don’t see the big picture, where they are headed, how it all works together.” Which, he says, makes it almost impossible to graduate the kinds of leaders this world needs.

“Leadership isn’t about skills. It’s about understanding a mission, understanding the goal. It’s the leader’s job to get the company, city, or even the country to be successful. But the move away from the more intellectual part of education to the technical part means we are training leaders who aren’t equipped to ask what that mission should be.”

While Jack Wilkerson, professor of accountancy and former dean of the Calloway School, is focused on what educating the whole person means for business students, he also has a much broader view of the issue.

“When you’re talking about educating 18 to 22 year-olds, you’re by default doing something formative. A psychologist would tell you there’s a lot of intellectual formation and development, moral development, that’s going on at this age. So my question is, if this is truly a formative period, then why not be purposeful and have a positive impact on that formation? Why not guide it rather than just let it happen?”

In the fall of 2008, Wilkerson began a sabbatical at a think tank— The Carnegie Foundation for the Advancement of Teaching— focused on teaching and learning. There, he joined a team of scholars working on a project entitled “The Preparation for Professions Program.”

“Their argument was that the distinguishing characteristic of a profession (like medicine or accountancy) is that there is a social contract, a public trust, intrinsic to the career.” Therefore, logic follows, the University has a responsibility to make students who are aspiring to a professional career aware of—and committed to—maintaining that trust.

“These scholars assert that there are three critical components to education for professional practice: technical knowledge, practice skills, and a third called normative purpose and professional identity,” says Wilkerson. It’s this third component that is so often lacking in professional education.

“As an accountancy professor, I might be very comfortable delivering technical knowledge. But I might not be as comfortable asking students to think about the normative issues of life beyond WFU. Yet it behooves us as higher educators to challenge our students in those ways, to have them reflect on the broad purposes they are pursuing or should be asking questions about. In a very real sense, we must ask students to internalize the broad societal purposes of their chosen profession.”

This is particularly important in the context of today’s financial markets. “Because of the erosion of the social trust between the business world and the general public,” says Wilkerson, “it’s more important than ever to challenge our students beyond technical knowledge and skills. It is they who are going to have to work at rebuilding that trust, re-establishing the social contract.”

Regardless of the academic specialty, or the chosen profession, it’s clear that educating the whole person is a critical goal for Wake Forest—especially in today’s global economy.

“We are increasingly becoming an interdependent world, so the national context is no longer the boundary of our moral obligation,” says Ilesanmi. “The new boundary of our moral obligation is the entire world. So, as we are educating the whole person, we are educating them not just for service in the American context but also in the rest of the world. It is that kind of global consciousness that we want to infuse in the minds of our students.”

Adds Balzano, “Whether our students are exposed to a healthy dosage of foreign languages and cultures, or experiential development, political thought, voluntary service, sports, environmental awareness and arts, they recognize the importance to be fully engaged, mind and body, in the enduring project of their education. “Through imagination, truth and responsibility, more and more they are conscious to be making an investment for their jobs and their own future lives.”

Editor’s note: This is the second in a four-part series describing key initiatives in Wake Forest’s strategic plan. In this issue, education of the whole person.