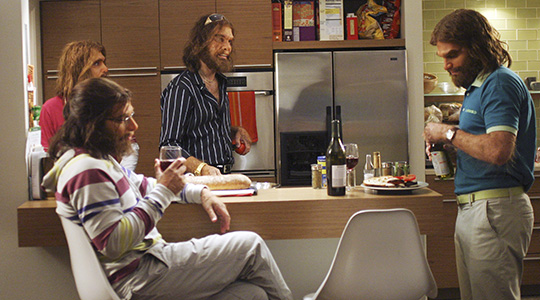 Takes the cavemen to Hollywood

Advertising executive Joe Lawson (’90) created the iconic cavemen television commercials to promote insurance company GEICO’s Web site–“So easy, a caveman can do it.”–while at The Martin Agency in Richmond, Va. Now he’s taken the cavemen to Hollywood as the co-creator and co-executive producer of “Cavemen,” which premiered in October on ABC. Just days before the show’s premiere, he talked about Wake Forest’s influence on his life, the inspiration behind the cavemen, and more.

So you must have a pretty glamorous life now in Hollywood?

Right now I live alone, in a mangy apartment near UCLA that feels like a rehab center. But I’m never there so it doesn’t matter. My clothes live there. My wife, Sheri, and our daughter, Harper, moved back to Richmond at the end of the summer so Harp could start school. We can’t really commit to either place until we know what’s going to happen with this show and/or my writing career. It’s great, the uncertainty of it all. I haven’t slept in months.

How did Wake Forest prepare you for what you’re doing now?

I majored in economics; I thought I was going to be a stockbroker or businessperson of some sort. I didn’t think it through as much as I probably should have. By the time I realized what I wanted to do with my life, college was way over. I didn’t take a theater or acting class until the last semester of my senior year, but I really loved them and obviously wish I had discovered that whole arena earlier.

Was there anyone at Wake Forest who was a mentor?

Wake seems to breed or exacerbate a positive expectation from life. At least it did for me. Or maybe that’s just the type of students it attracts. Either way, I left there feeling I could do anything once I figured out what that thing was. Of course, if this show bombs, then I’ll realize I was wrong.

What did you do after graduation?

I took a job in a management-training program at a big pharmaceutical company. Then I held various jobs in various places until finally ending up at the Portfolio Center in Atlanta. I joined The Martin Agency in 1998 and resigned when ABC bought the show.

You’re obviously well known for the GEICO commercials, which included the great “Tiny House” spots, but what were some of your other successful ad campaigns?

GEICO has certainly been the most rewarding creatively. The NASCAR campaign, “We want to race the truck. People love the truck” has been very effective for UPS. The “Reward Your Curiosity” campaign for Vanilla Coke helped sell a ton of that stuff when it launched. Some weird campaigns for PING golf clubs. It was all fun.

How did you develop the caveman theme to sell car insurance?

It just sort of popped out one day while working on a new TV campaign for GEICO.com. We were just sort of fed up with how politically correct the culture had become and how difficult that made it to do our jobs well. So we insulted cavemen, just to get it out of our system. GEICO uses different campaigns and themes to reach different target audiences. For example, the gecko appeals to a very different audience than the cavemen.

What inspired you to take the characters from a 30-second commercial to a 30-minute sitcom?

We just liked the characters and wanted to spend more time exploring the different shades of their personalities. We wanted the challenge of taking them from being a bunch of grumpy furballs to a team of underdogs. If we succeed, it will be because the audience related to the cavemen on a human level, which is a strange thing to say, but technically makes sense. I think.

How do you make viewers realize they’re watching a TV show and not just a really long GEICO commercial?

The show has nothing to do with GEICO other than the fact that they had cavemen in their commercials and we have cavemen in our show. GEICO has no creative input and is never mentioned. This isn’t branded content, it’s just content. I think once people actually see the show, they’ll realize there is no blurring of the lines. It looks like a TV show. It feels like a TV show. If critics have a problem with the fact that we sold a show based on a commercial we did, that’s fine. I don’t feel like we’re deceiving ourselves or the audience. Let’s not forget, the mega-successful and much beloved “Pirates of the Caribbean” franchise, starring the great Johnny Depp, is based on a theme park ride.

Can you give us a quick synopsis of the show?

Three twenty-something cavemen set out to achieve their dreams in modern-day San Diego.

Critics aren’t quite sure what to make of the show. Early buzz was that it was a creative take on race and stereotypes. Then it was about “fish out of water.” What’s your take?

It’s about the universal desire to fit in and be part of a group while simultaneously needing to stand out and be recognized as an individual. But at its core, it’s just a show about being an underdog. Hopefully, a funny show.

One reviewer compared the show to “Alf” and “3rd Rock from the Sun.” What would you compare the show to?

Those were both successful shows. And they were about outsiders, so the comparison is fair. But ultimately I think our characters and the world they live in are more believable. And I can’t believe I just said that.

You’re fortunate to work with some veteran directors and producers, aren’t you?

Absolutely. I get to work with people like (co-executive producers and directors) Will Speck and Josh Gordon, who directed “Blades of Glory” with Will Ferrell. We are great friends and a good team, and that’s the most rewarding part. We used to sit around and talk about how fun it would be if we all worked together on our own TV show, and now here we are. Screaming at each other.

Why weren’t the actors in the commercials hired for the TV show?

The actors and the crew we have are amazing. Bill English plays Joel, the main character. His best friend, Nick, is played by Nick Kroll. And Joel’s younger brother, Andy, is played by Sam Huntington. The actors we used in the commercials are all fantastic as well. But two of them were unavailable due to previous commitments. The third, Jeff Phillips, is a recurring character on the show and plays Maurice, the eccentric best friend.

Oh, there are. They’re incredibly sexy, yet terrifying. I was scared to even go on set.

Now that the show is underway, what exactly do you do as a writer and co-executive producer?

The routine changes every week as we get closer to launch. Normally I would spend every day jumping back and forth between the writers’ room and the set. But lately it’s that, plus figuring out the music for each episode, plus finishing the main title sequence, plus editing, plus all the other stuff we have to have finished and approved by Tuesday. It’s insane right now.

With the premiere just days away, what’s going through your mind?

The surreality of it all. Fear. Hope. I’m very distracted. Constantly bumping into things. Constantly apologizing to people for no reason. Someone will say “good morning” and I’m like, “I’m sorry.” It’s weird. I’m really nervous and fragile. It’s like taking your clothes off in front of ten million people, but wanting it to be twenty million people. And wanting them to laugh.

According to their online “bios,” the cavemen graduated from Carnegie-Mellon, Penn State and the University of Pittsburgh. What, no love for Wake Forest? But wait, one of the cavemen’s favorite Web sites is collegehumor.com, started by a couple of Wake Forest guys; do you know those guys?

The only one that could’ve gotten into Wake is Andy, but he chose Penn State because he wanted to stay close to home. I don’t know the College Humor guys personally, but I’m a fan of the site and Nick Kroll, the actor who plays Nick the caveman, is friends with them. Or at least he says he is.

Do you know Carol Barbee (’81), who’s the executive producer of “Jericho?” How cool would that be to have the cavemen show up on Jericho?

I don’t know Carol, but I Googled her and she seems very nice. I’d love for the cavemen to appear on Jericho, especially since that fan base is so rabid. Plus, it makes perfect sense– cavemen are incredibly resilient. If they can survive the Ice Age, why not a nuclear attack? For now, let’s just hope they survive the critics.

Any resemblance between the cavemen and anyone you knew at Wake Forest?

I didn’t know him personally, but the Demon Deacon is not uncavemanlike.

Joe Lawson (’90) takes his cavemen to a weekly series.

Carol Barbee (’81) oversees the lives of the residents of Jericho in the aftermath of a nuclear attack.