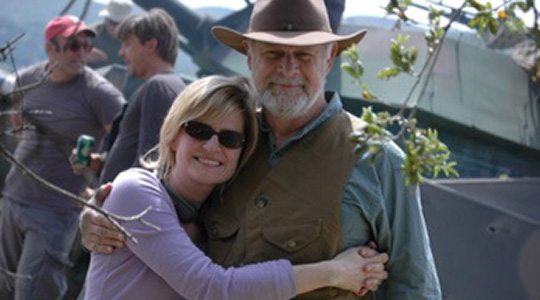 Veteran television writer and producer Carol Barbee (’81) oversees the lives of the residents of a small town in Kansas as they struggle to survive in the aftermath of a nuclear attack, in the CBS drama Jericho, which premiered last year. The show, cancelled after its first season, is now scheduled to return this winter with seven new episodes. Barbee, the show’s executive producer, lives in Santa Monica, California, with her husband, actor and playwright Carlos LaCamara, and their two sons, Lucas (14) and Diego (10).

How did Wake Forest prepare you for a career in Hollywood?

I was lucky enough to be a part of the theatre department in the new/current theater arts building. Dr. (Harold) Tedford, Dr. (Don) Wolfe and Ms. (Caroline) Fullerton were wonderful teachers, mentors and friends. Dr. Wolfe had the greatest, most generous laugh, and Dr. Tedford told the funniest stories. Ms. Fullerton was instrumental in my going to UCLA. One day my senior year, Ms. Fullerton was watching a rehearsal of a play I was in. When I came off stage, she called me up to where she was sitting in the house and said to me, “Have you decided where you’ll be going to graduate school?” I hadn’t thought about graduate school. But the fact that Ms. Fullerton thought I could get an MFA in acting made me feel I could. I loved the Wake Forest theatre department. I felt at home there.

How did you break into acting?

After I graduated UCLA, I did a lot of theater in Los Angeles, joined a theater company called City Stage, of which I am still a member. An agent signed me from a play and I started working in television (and a little bit of film.) I worked mostly in one-hour dramas. The format just seemed to fit me. I could do the dramatic, emotional material but I would always try to find a way to bring a little humor to the scene. When I began writing, the one-hour format came naturally to me.

As an actress, you had guest parts on ’90s hits such as “LA Law,” “The Fresh Prince of Bel-Air,” “Blossom,” “Northern Exposure,” “Ellen”and JAG, so why did you decide you had a better future behind the camera?

I was always meant to be a writer, from an early age. I wrote poetry and stories, songs. I remember telling my tenth grade boy friend that I was going to write a novel. (Freaked him out, actually…) But I knew that first I needed to have an interesting life. I needed life experience so I’d have something to write about. Ten years of being an actress gave me that. When I finally found a story I wanted to tell, I was ready. I took classes in the writing program at UCLA Extension until I completed my screenplay. That screenplay won an award UCLA gave in conjunction with DreamWorks Studio.

Then you got your first major writing gig on “Providence”?

They were having a hard time finding female writers for “Providence” which had not yet premiered. The producers liked my material and hired me to write a script. The show premiered to great numbers, they put me on staff and I was there for five years. When “Povidence” was cancelled, I was hired onto the staff of “Judging Amy.” The next year, I was asked to run the show and I had one of the best creative experiences of my life there. I learned so much about running a writing staff, arching out a season of stories, handling network notes and creative collaboration.

How did you land on Jericho?

I did a year on a Bruckheimer crime drama (“Close to Home”) just to see if I could tell those types of stories. When that season was coming to a close, CBS asked me to run one of their pilots. I chose “Jericho.” I loved the small town of it. The characters. Ordinary people in extraordinary circumstances. And I’m a bit of a sci-fi geek. I loved the speculative fiction aspect. I also thought it would be a hit and I was excited to do something so different than what I had done.

What does the executive producer do?

The executive producer is the boss, and in television, the EP is also the head writer. All decisions go through the EP. The stories that are told, the words on the page, the editing, the designs of the sets and costumes–everything has to be approved by the EP. The EP also deals with the network and studio and the press. On an average day, I spend time in the writers’ room hearing story pitches; reading scripts and giving notes; popping into editing to watch a cut or work on particular scenes; fielding calls from the network and the press–then heading to the set to watch filming to be sure the director is making his day (shooting all of the scenes scheduled for that day) and getting the coverage and performances we need. I also check the pages to be shot the following day and rewrite them if necessary.

How many people are in the cast and crew? How long does it take to film an episode?

We often have as many as a hundred extras on the set but usually it’s in the 20-50 range. There are approximately 300 people who work on the show–cast, crew, writers, producers, editors. Last season, each episode was filmed in eight days. This year, with our budget and time constraints, we shot each episode in seven days. We shoot mainly on our stages in Van Nuys (interiors of Bailey’s Tavern, the Green family house, Hawkins’ house, Gracie’s store, Town Hall, Sheriff’s Department) and on our backlot with all of our Main Street exteriors. We usually shoot two days out at a ranch in Simi Valley where we have built the Richmond Ranch. On an average day, we will shoot six to seven pages of a fifty-page script.

Jericho is heavily “layered,” with stories behind stories, so how do you keep it all straight?

When we sit down to arc out a season, we talk about the big ideas for the run of the series, then the big ideas for the current season. Once we figure out how far we want the story to go in the number of episodes we have been given, we begin to arc out specific episodes. Writers are assigned individual episodes and from that point on, my job is to read the scripts, give notes and if necessary, rewrite the scripts.

The cult status of “Lost” is well know, but Jericho has taken on cult status too; did you expect that? Are you putting in special “clues” for the die-hard fans?

We always felt that Jericho was a show that would appeal to the Internet audience, gamers, sci-fi and comic book fans, so we hoped it would get the loyal audience that it ultimately got. As far as laying in clues and special features for the fans–the Morse code over the title card of each episode spells out a clue about that episode. It changes each week. Anytime you hear Morse code on the show or the DVD, there’s a message to the fans in it. Also, several of the writers and producers have done cameos in the show.

There was a Jericho Convention in mid-September in Oakley, Kansas, the town nearest the fictional Jericho. Did you go?

I was not able to go to the Jericho convention, as we were shooting, but we were in touch with people who were there and received photos and blogs from the event. They renamed places in their town after the show–Bailey’s Tavern, Richmond Ranch–how cool is that?

In the season finale, Jericho’s neighboring town, New Bern, was mounting an attack on Jericho. You wrote and produced that episode, “Why We Fight.” A great episode, but how could you kill off Major Dad (Gerald McRaney)?

Gerald McRaney’s character, Johnston Green, was always meant to die at some point in order for Jake to step up and become the leader of the town. The season finale was the perfect time to do it and with the war with New Bern starting, we had the perfect hero’s exit.

Growing up in Concord, NC, did you have something against New Bern, NC?

I can’t take credit for naming the warring town ‘New Bern.’ Some of the writers came up with it. I have no animosity toward the town of New Bern, NC, in fact it’s lovely there.

That same episode ended with a chilling shot of a new U.S. flag. Will the new season give more clues as to what’s happening outside Jericho?

The flag of the new Cheyenne government is seen in “Why We Fight.” That flag, with its vertical stripes and twenty-one stars, will be explained in the season two opener and yes, this season will open up our world and show what’s going on in the wider country. The audience will find out who attacked us and why and what Hawkins had to do with it.

Will the seven new episodes wrap up everything, or are you hopeful that CBS will order additional episodes?

The seven episodes tell a complete story, have an amazing and satisfying ending and will let the audience know where we’ll be heading if we get a season three.

Do you know Joe Lawson (’90), who created ABC’s Cavemen show?

I do not know Joe Lawson but I applaud him for getting a show on the air. That’s a major achievement. Also, I love those GEICO commercials, so, well done, Joe.

Joe Lawson (’90) takes his cavemen to a weekly series.

Carol Barbee (’81) oversees the lives of the residents of Jericho in the aftermath of a nuclear attack.