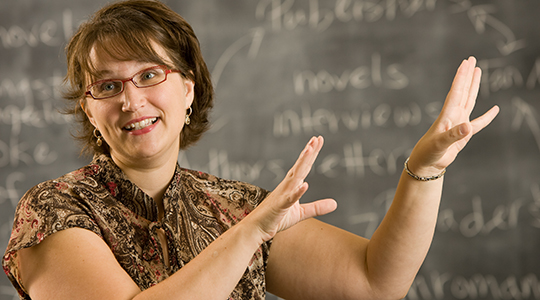 Assistant Professor of Religion Lynn Neal and her first-year seminar students spent a semester exploring the relationship between religion and popular culture in contemporary American life.

“Our challenge was to take a “fun” topic seriously,” says Neal. “The class examined surprising manifestations of religious life made possible through popular culture. From Simpson spirituality to Christian romance novels to the myth-making of professional wrestling, students investigated three dominant patterns: religion in popular culture, popular culture in religion and popular culture as religion.

As part of the seminar, students formed three groups and made final presentations incorporating what they had learned throughout the semester. One presentation discussed Facebook as a religion, another discussed religion on South Park, and the third addressed Oprah as a religion.

Listen to Lynn Neal discuss how she came up with the idea for her first-year seminar and what she hopes students take away from the course. (16 min.)

Listen to Mark Pinsky, religion writer for the Orlando Sentinel and author of “The Gospel According to the Simpsons” discuss religion and popular culture. (19 min.)