Romance for the Religious 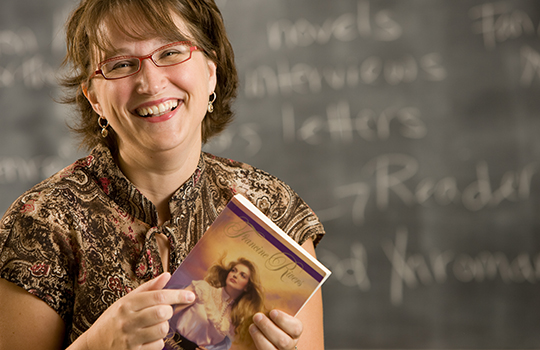 Assistant Professor of Religion Lynn Neal’s latest publication, Romancing God: Evangelical Women and Inspiration Fiction seeks to explain what draws women to this popular form of fiction and why they keep coming back.

Not your garden-variety swashbuckling bodice-rippers

It’s funny how easily stereotypes can be confounded. Would we expect, for example, women who are evangelical Christians to read romance novels? Heavens no! And yet, they do — avidly. But these novels are not your garden-variety swashbuckling bodice-rippers. No steamy passion or sex — certainly none outside marriage — here. Infused with biblical tenets, they dramatize the challenges of Christian relationships in a secular world and serve as inspiration that helps their readers maintain their faith in a profane culture.

The little-known but vital literary subgenre of religious romance novels is a research focus of Assistant Professor of Religion Lynn Neal. Neal, who holds a master’s degree in theological studies from Duke Divinity School and a doctorate in American religious history from UNC-Chapel Hill, served as a visiting professor from 2003 to 2005 and returned as a tenure-track faculty member last fall after a year at Appalachian State. Besides her current research on religious intolerance, her primary scholarly interest is the interface between Christianity and gender and popular culture issues. For her doctoral dissertation, she examined religious romance novels, interviewing twenty authors and fifty readers. UNC Press has published it as a book titled Romancing God: Evangelical Women and Inspirational Fiction.

“I wanted to pursue a study that questioned the stereotypes of evangelicalism,” says Neal, who characterizes the movement by its emphasis on the authority of the Bible, a personal conversion experience, and witnessing that experience to others. “It’s a study of women in evangelicalism — of how one sustains her faith on a daily basis in the face of doubt and the distractions posed by popular culture. “The novels are effective for these women on a spiritual level,” she explains. “They’re for, by, and about women, and insofar as the pulpits of [evangelical] churches are restricted to men, they constitute a form of women’s ministry in a cloaked and covert way. They’re fun to read, yet they stay within the bounds of the evangelical faith by upholding conservative sexual and gender values, for example. The women who read these books are trying to get closer to God, and by depicting an image of a nurturing and forgiving God more than one of judgment and wrath — the titles suggest a God who is romancing humanity — they help their readers recover their feelings of faith.”

According to Neal, first-generation religious romance novels dealt only with religious experiences, dramatizing the conversion of one or both members of a couple, for example. “Now, they’ve opened up, portraying the full range of challenges in a marriage today–even infidelity,” she notes. “If one thinks of evangelicalism as permeating life, then everything — the anger felt toward an unfaithful husband, for instance — is a spiritual problem, and the true nature of forgiveness is explored in that light. In these novels, the tensions within a marriage are always religious in nature. And the message they impart is, the closer the couple gets to God, the closer they get to each other.”

Neal is co-authoring, with John Corrigan of Florida State University, a history of religious intolerance in the United States, concentrating her efforts on the twentieth century. “It’s a tough topic to teach because our national ideology of religious freedom and tolerance is so ingrained in us,” she says. “Intolerance is just not part of our framework, but it is a vital part of our history.” She currently is at work on a chapter on anti-semitism, which she says was at its worst in the last century, and will dedicate another chapter to the Branch Davidian massacre at Waco, Texas, with the view that it cloaked religious intolerance in the mantle of policing the secular transgressions of David Koresh and his followers.

Listen to Lynn Neal discuss how she came up with the idea for her first-year seminar and what she hopes students take away from the course. (16 min.)

Listen to Mark Pinsky, religion writer for the Orlando Sentinel and author of “The Gospel According to the Simpsons” discuss religion and popular culture. (19 min.)