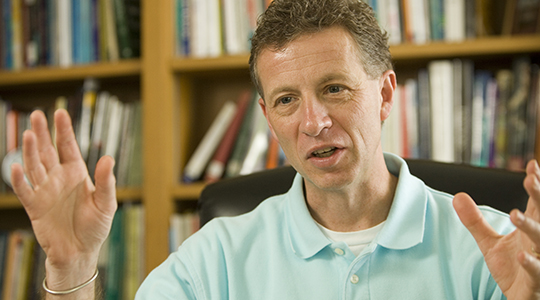 Professor of Communication Randall Rogan’s two trips to Israel have brought home for him how terrorism has changed and will continue to change world relations.

Can the dissemination of radical ideologies be controlled?

Two trips to Israel have brought home for communication professor Randall Rogan how terrorism has changed and will continue to change world relations. Rogan attended the Defending Democracy, Defeating Terrorism fellowship program, hosted by the Foundation for Defense of Democracies–a nonpartisan policy institute created in response to 9/11 whose mission is to fight the ideologies that drive terrorism. That these doctrines are disseminated using easily accessible mass communication strategies fits Rogan’s interest and expertise.

“We had access to the highest level of Israeli government. We were briefed on suicide bomber’s activities in Israel and viewed footage from a three-hour film that Iran provided Hezbollah and Hamas on how to construct a suicide bomb vest,” says Rogan. Site visits included trips to key conflict areas, visits to police operations headquarters, and a trip to a prison cellblock housing convicted terrorists.

While only a minority of Muslims practice radical Islamic jihad, the desire within radical Islam to create a dominant Islamic global state is spreading the fear of terrorism. How film, television, and the Internet promulgate hatred, killing, and death is a matter Rogan says we can’t afford to ignore.

Life in Israel
See photos from Rogan’s trip and hear about his experiences in the Middle East. Watch the video »

Wake Forest Professor of Religion Charles Kimball writes about what happens when religion becomes a cause of violence and destruction in his book When Religion Becomes Evil.

Former Israeli Army Captain Asi Burak helped create a Middle East peace video game called PeaceMaker. The goal of the game is to strategize about ways to “win the peace” between the Palestinians and Israelis. Listen to an interview with Burak on NPR.

“Seeing how Israel manages to exist as a democracy while under siege on a daily basis was enlightening. I came away from the visit with a much deeper and broader understanding and knowledge about the Middle Eastern conflict and its connectedness to global terrorism.” Randall Rogan

Americans accept that the freedom that comes with open access to the World Wide Web means that people will create sites used for subversive purposes–but the question arises as to whether terrorist Web sites should be hosted in the U.S. “The use of cyberspace by radical factions to promote terrorist activity is disarming because our culture generally doesn’t give a lot of thought to how Internet sites are used. Researchers and intelligence analysts estimate that approximately sixty percent of terrorist Web sites are hosted on U.S. servers. And while the instinct is to shut them down, it’s a Catch-22 because although the sites are used to recruit young, often marginalized Muslims to jihad, they also provide intelligence resources where investigators can learn about and track these radical organizations.”

“Perhaps most disheartening and disturbing,” Rogan says, “is how children are being indoctrinated into believing that they should kill and die for their struggle, to not value life nor to want to live, and that their religion not only justifies such thinking and actions but that it requires it of them. There exist myriad examples of video footage from Middle East media outlets in which cartoon-type characters teach school-age children disrespect for others, anti-Semitism, animal cruelty, and that the death of non-believers and the use of martyrdom to bring it about are glorious.”

An example of the indoctrination of children: A “Mickey Mouse”-type character teaches children about death and hatred.

Traveling to Israel has supplemented Rogan’s already extensive knowledge and experience in hostage crisis negotiations. He has worked with the FBI’s Critical Incident Response Group in the crisis management unit, and for him hostage negotiation and terrorism are directly linked. “Understanding the communicative dynamics of terrorism is central to working toward resolution,” Rogan says. “I hope to learn more about how to communicate and negotiate with terror groups, and if negotiation is even possible in certain contexts, such as with suicide bombers. Given the proliferation and potential threat of radical Islamic terrorism in the U.S. and Western Europe, understanding the dynamics of terrorist negotiation is essential.”