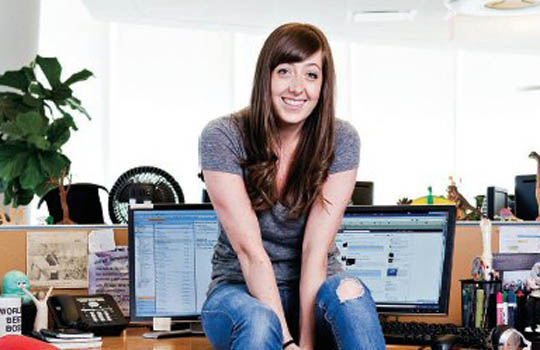 Sarah Schneider (’05) is well versed in the way social media encourage users of sites ranging from Twitter and Facebook to YouTube and Yelp to generate content and interact with others. She is a writer, actress and managing editor at CollegeHumor, a company founded by Ricky Van Veen (’03) in 1999. Based in New York and a resident of Brooklyn, she writes scripts, brainstorms ideas for creative content, acts in videos and maintains the website at CollegeHumor.com.

Well, I don’t think the two are exactly comparable. Internet media sites like Hulu and CNN.com are much more of a threat to traditional television and newspapers than social media sites like YouTube or Tumblr, which are in a class all their own.

Traditional media is, by definition, onesided. Social media are completely different in that anyone can add his or her voice. It’s a totally new form of interaction that can only exist on the Internet. In fact, I think if anything, social media offer a new level of community to the traditional media experience. People can share a good magazine article on their blog, or post the trailer for a new sitcom on Facebook, or arrange a discussion group for the latest Scorsese film on Meetup.com.

Granted, users can then read the article online, watch the sitcom online or discuss the film online, but that’s a whole different problem. I personally don’t see traditional media going anywhere, but that may just be because I don’t want to imagine my life without television. The concern here, though, should be social media’s ability to make real-life social interactions irrelevant.

Q. Ricky Van Veen said in a speech at the Mashable Media Summit in June that social media are social currency, providing high-tech “bragging rights.” What is your interpretation of those comments?

The great draw behind social media is that they offer you a chance to present yourself however you want. It’s like freshman year of college all over again, where you can reinvent yourself to be the coolest, most interesting version of yourself. When Ricky speaks of high-tech bragging, he’s speaking of this process, whether it’s posting pictures on Facebook from your front-row Yankees tickets, checking in on Foursquare at the latest cool bar, or tweeting about someone famous you just met.

Another interesting element of social media is that the higher your online profile, the more social “value” your opinions, comments and content offer. If you have 40,000 Twitter followers, then your recommendation for a movie or restaurant is “worth” more than another fellow Twitter user who has a dozen followers. It’s interesting because it creates this odd valuation of your online persona and drives the desire to accumulate more and more friends, followers and the like. Everyone wants to matter, and within social media, the more people you interact with online, the more you feel like you do. That’s why people spend hours contributing to sites like Yahoo! Answers and Wikipedia and Digg, because their participation truly matters.

Q. We’re seeing that the new generation puts documentation above experience (capturing an event on their phones as opposed to watching it firsthand). What will that kind of scene mean for in-person social interaction?

Social media in general have done a number on in-person social interaction. Why plan to have lunch with someone when you can just IM or Gchat them and ask what’s new? Or, even better, just flip through their Facebook pictures and you don’t have to talk to them at all! But at the same time, our generation is leagues above our parents and grandparents in terms of keeping in touch with old friends and documenting our experiences. I have a very close-knit group of friends from Pi Phi at Wake Forest, and in one way or another, we are constantly in touch with each other.

Millennials are a very nostalgic generation, and the ability to capture every moment is incredibly valuable to us. But do I think this devalues the experiences themselves? Not at all. Just because I’m taking a picture at a party doesn’t mean I’m not still at the party. Now, if I’m leaving the party to write a blog post about my night’s experiences, that’s a problem.

Q. What is the next frontier for social media?

That’s a great question, and one I most definitely am not qualified to answer. But if I had to venture a guess, I would say that I see social media becoming more and more influential on traditional media. By this I mean television shows where character arcs are decided by online polls or networks that allow Facebook fans to choose their next season’s lineup. Several popular YouTube creators have gotten development deals based solely on their number of subscribers. I can only see more of that in the near future.