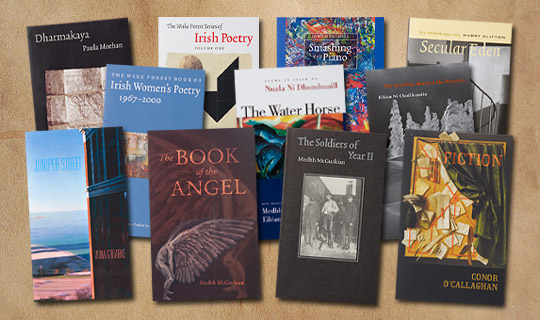 By the time Tribble Hall Opened in 1962, anxiety over the threat of nuclear war with the Soviet Union had built to a critical mass in the United States. The ten days of the Cuban Missile Crisis detonated all that pent-up tension into full-blown fear that October, and Wake Forest College responded to the emotional fallout by designating the building’s basement as a bomb shelter. Food, medical supplies, bedding, and barrels for drinking water were stored on its subterranean level to withstand the hard rain that many were certain was going to fall.

Today, Wake Forest University Press is located there, and somehow a former fallout shelter seems a fitting site for a small press in a precarious publishing environment, especially one with a specialty as circumscribed as Irish poetry. The Internet, with its loose adherence to copyright and even looser standards of quality; the economic and distribution challenges posed by publishing as it becomes more homogenized and commercially driven; the diminishment of poetry in secondary schools; the truncated attention spans of younger readers and the implications of that for a literary form whose concentrated language demands focus and reflection; the waning of the independent bookshop, the traditional and stalwart source for poetry; the dwindling purchases of poetry volumes by academic libraries as they emphasize the building of their digital collections…all of this can be toxic to the long-term survival of an enterprise such as this.

Yet, Wake Forest Press prospers in its own modest way, thanks to the spirited resurgence of Irish culture and its writing in particular, and to the talents and ingenuity of its tandem of staff members and its founding advisor. Now in its fourth decade, the Press is recognized internationally as the premier publisher of Irish poetry in North America. Its catalog includes virtually all of Ireland’s foremost poets except Seamus Heaney as well as a new generation of younger writers who are reflecting on the dramatic transformation of Irish society and the Celtic economy over the past decade and a half, along with the traditional concerns of Irish poets — faith, oppression, family, backwardness, poverty, and of course, The Troubles.

Within its catalog of more than sixty volumes are editions of the collected poems of Thomas Kinsella, Michael Longley, John Montague, and Richard Murphy — who, along with Austin Clarke, whom the Press also published at its outset, are on most short lists of the most eminent Irish poets of the post-Yeats period — and books featuring works by such prominent writers as Peter Fallon, Derek Mahon, Conor O’Callaghan, Medbh McGuckian, Ciaran Carson, Paul Muldoon, Eiléan Ní Chuilleanáin, and Nuala Ní Dhomhnaill. “I believe that by publishing some of the best Irish poetry of the moment,” noted Fallon, who also directs Ireland’s preeminent poetry publishing house, Gallery Press, “Wake Forest is by extension publishing some of the best poetry of our time.”

In addition to publishing them, the Press periodically brings its poets to Wake Forest’s campus to read their poems or teach. O’Callaghan and his wife, Vona Groarke, whom the Press also publishes, have taught for two years and are on campus again this spring. Longley, Ní Dhomhnaill, Carson, Mahon, Murphy, McGuckian, Muloon — all these and others have given public readings and met with students and patrons of poetry at the University.